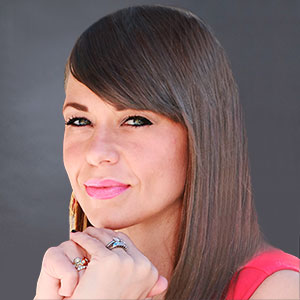 This week we hear from Barbara Palumbo, industry writer, podcaster, and founder of the What’s on Her Wrist blog and Instagram feed.

Barbara Palumbo: Well, I have technically been a full-time member of the jewelry industry in some form or another for half of my life. I started 23 years ago as a runner for Steven Singer Jewelers on Philadelphia’s famed Jewelers’ Row—and I just celebrated my 46th birthday. Writing that just now actually put a lump in my throat. Half my life. I’ve been here for half my life. That sounds crazy saying it out loud.

In terms of the industry changing, obviously when I started there was no such thing as buying diamonds or jewelry on the internet. In fact, I remember the exact moment—which happened about three years after I started—that a customer came in holding a GIA certified diamond that they’d bought on BlueNile.com.

The customer wanted to have it verified by a gemologist to guarantee that the diamond matched what he purchased online, and when I tell you it was blowing everyone’s mind in the store, I mean it.

When the guy left after he was told that it checked out, we kind of all stood around looking at one another saying, “Who on earth would spend that kind of money on a diamond without seeing it first? That’s insane!” Little did we know Blue Nile would eventually become what it did, although it certainly seems like the tide is turning again and that consumers are putting their faith back into reputable retailers. But it also seems like diamonds are becoming less sought after for engagement rings, so that’s definitely another change to which I have a front row seat.

Well, funny you should ask! I think I’ll go back to my first ever experience with JCK magazine, which was not as a reader, but rather as someone who was hired to model for images they used in their press kit and on mailers back in the year 2000.

This is not a lie. I’d done modeling in my late teens and early twenties, and the photographer who was doing the shoot knew me because she had taken my picture on occasion. So, she asked if I’d be interested in doing it, since I also knew about jewelry. At the time, JCK was headquartered in King of Prussia, Pa.—about a 30-minute drive outside of Philly—which made it easy for their team and me to work together.

But it was that experience that lead me to be an avid reader of the publication and eventually to my becoming friendly with many of the magazine’s editors and sales associates. And, thankfully, I’m still friends with some of those people today.

It’s meant different things to me over the years, because I’ve worked in so many different roles in this industry over the years. When I was a sales rep on the road lugging $2 million in jewelry across the country, I’d seek out articles about crimes or heists. When I was a buyer for a successful retail store, I’d read the trend pieces. When I was an executive with an internet company, I’d look for the tech-related articles, but I think that’s the beauty of the magazine. No matter what a person does in the industry, there is something for them to read. And knowing that it started all those years ago in my home city means a lot, too. JCK may be headquartered in New York City now, but for me, it will always be Philly at heart.

I think the first thing that stood out for me with regard to the magazine was the cover. That’s what everyone sees first, and I don’t ever remember a JCK cover not looking colorful and current. Obviously, the size of the book has changed over the years, both in diameter and in width (print ad sales are most certainly harder to come by these days), and, of course, editors and contributors come and go, but overall, the soul of the publication has remained, and that’s likely why it’s still around.

As a writer, I understand fully what it means when something has soul. When I read articles by anyone in this industry that are little more than glorified press releases telling me nothing special, I cringe. I’ve had editors over the years who wrote that way, and ones who tried to make me write that way, too. But I’d refuse, because while a heart provides the body with life, it’s the soul that provides it with meaning. And I’m really happy to see that, even after 150 years, JCK still has its soul.