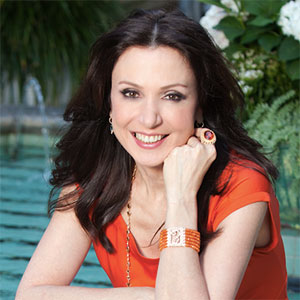 This week we hear from Los Angeles–based jewelry designer Erica Courtney, whose colorful and decadent designs helped kick-start the global craze for colored gemstones in the 1990s and early 2000s.

Erica Courtney: I have been in the industry for over 30 years. Since the early 1980s!

In what major ways has the industry changed since you’ve been in it?

When I first started, jewelry was much more cookie-cutter: There were only diamonds, emeralds, rubies, and sapphires (the “big four”) set in jewelry. If any other colored gemstones were used at the time, they were noncollectible and inexpensive. These days, there is an allure to color; the more special the color is, the quicker it sells.

My clients come to me for something different. They want a conversation piece—something that no one else can get.

What’s your experience with JCK magazine—or a good memory of JCK?

I love the profiles written in JCK. They are so in-depth and professional, which helps JCK’s audience really get to know the designers being profiled.

You’re a longtime JCK Las Vegas exhibitor—what do you like most about the show?

I love exhibiting with JCK because I feel that’s where the buyers are, and the buyers there are serious. Also, as big as the JCK Las Vegas show is, it somehow feels like a smaller, more intimate event, because the show organizers really take care of their buyers and exhibitors.