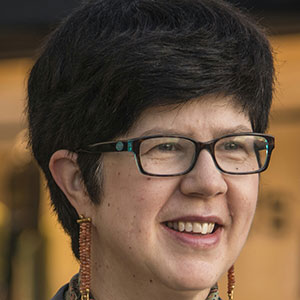 Last week we kicked off an online story series to celebrate JCK magazine’s 150th anniversary in which we asked industry professionals to share their memories of the magazine and ruminate on what JCK has meant to them over the years.

We initially collected these interviews for a series of feature stories in the magazine that aims to chat with 150 top industry pros by the end of 2019 (the first of which ran in the Jan./Feb. issue).

But because so many of the responses we received were insightful, interesting, and downright wonderful—and we don’t have the space to publish them in full in print—we’ve decided to post one industry interview every Thursday on JCKonline.com this year.

Freelance writer Peggy Jo Donahue (pictured above), this week’s interview subject, has a deeper connection with JCK than most. Donahue cut her teeth as a reporter and writer at the publication in the early 1980s and eventually became its editor-in-chief.

Donahue, now a freelance writer who’s been a firm and delightful presence in the industry ever since, sent JCK news director Rob Bates the answers to his questions in essay form. And really we’d expect nothing less from this phenomenal wordsmith!

Here’s her reply, which she entitled “Why JCK Matters.”

It was a summer day in 1979—40 years ago. I was 23 and plugging along as a freelance writer, trying to get a full-time job as a journalist. Scanning the want ads, I suddenly saw “EDITOR.” I could hardly believe my eyes. “Top, award-winning trade magazine specializing in precious materials (international readership) wants one very good person. Qualifications: Much talent. Proven professional writing ability. Curiosity about why people do what they do. Tough and determined reporter. Working knowledge of people diplomacy. Open to new ideas and challenges. Widely read and possessor of an interesting education.”

That was my introduction to JCK magazine and the wondrously succinct writing skills of then–editor-in-chief George Holmes. I managed to get the job, after an arduous application process, which included writing a test story (mine was on a jeweler who plied his trade in Cape May, N.J., a seaside resort).

From that first story, I learned the key to every story I wrote subsequently. George’s command to me was this: “Your article has to educate, entertain, and inspire the retail jeweler.”

This simple advice has served me well for 40 years, and I was impressed by how much JCK took George’s command to heart.

JCK was a place where truth and fairness mattered, and where editors were barred from receiving jewelry gifts or anything of value. We also could not buy jewelry at wholesale prices. George advised us to shop at retail and support our readers. Editors also had to preserve the distance required to be objective by not joining organizations that we might cover in our work, because that would make us too “familiar” with the people we had to interview. I love that JCK maintains these ethical rules.

That’s not to say we didn’t have fun, however, or that we didn’t attend industry events to hear news, and, well, enjoy ourselves! I remember sweeping into some social event once, rushing past my editor George Holmes without seeing him. The bar was ahead, and it had been a long day. George was standing with the publisher of Modern Jeweler, and turned to him, smiling, and quipped dryly: “Typical JCK editor!”

During my early years at JCK, I loved writing about the wonky things jewelers needed to know about, but that weren’t glamorous. My first beats were legal issues, security, and insurance—topics that would put most editors to sleep, but I loved them!

The early 1980s were a brutal time for violent crime, and jewelers were targeted. In one 12-month period, over 50 people were killed in jewelry store crimes, a number that has never been matched, according to Jewelers’ Security Alliance records.

That year, a jeweler from Philadelphia had killed a youth who was robbing his store, and I attended his trial and interviewed the jeweler. He had been held up 10 times in the past 10 years and was ultimately acquitted. With the help of my two colleagues, Russ Shor and Bill Shuster, we also managed to collect personal information on all 50 people who had been killed, so we could list them in print. As the legal reporter, I also compiled a chart of all the bills that were in Congress then to help quell violent crime, so jewelers could write to their representatives.

Insurance during those times was a nightmare, too. Because of crime, there were certain states where, unimaginably, Jewelers Mutual and other insurers had to cease writing policies for a time because the risks were so high. The standard jewelers’ block policy was also a nightmare of legal gobbledygook, in the days before consumer protection laws required simplified legal forms. I sat with a great Jewelers Mutual agent, Bob Lucente, who helped me translate every crucial paragraph in a standard jewelers’ block policy, so jewelers would understand what they were signing—and obliging themselves to do.

Believe me, it wasn’t clear! In the story we created, JCK ran the legal language in one column, and the “translation” in the other, paragraph by paragraph. I remember that jewelers loved it!

These kinds of stories and special reports took months to complete, required a lot of editing (I was still a rookie, after all), and it fills me with awe that I worked for a magazine that allowed us such luxury of time. JCK in those days was a place where the clatter of manual typewriters still rang through the halls, and we actually physically used scissors and glue to “cut and paste” our paragraphs as we edited ourselves! We also typed our stories in narrow columns, so our editors could estimate how much room they would require in print.

In those days, most news came by way of the telephone or printed press releases. We spent time in the library doing research, because there was no Wikipedia and no websites to check. But mostly, we interviewed jewelers and their suppliers by phone or during trade shows and conferences. Their knowledge and wisdom provided our copy.

And, despite our ethical rules, we did make close connections to so many trusted jewelers in the industry, especially the ones who worked so hard to volunteer for organizations such as the Jewelers Vigilance Committee, the Jewelers’ Security Alliance, and the American Gem Society. I was in awe of their volunteer dedication, and, once I had ceased being a full-time journalist and went to work for associations, I followed their path by joining the Women’s Jewelry Association and becoming a member of its board. That tradition of giving back inspired me so much.

When I walked into JCK that first summer day of 1979, little did I know that I would find a home in the jewelry industry that’s provided a challenging, fulfilling career.

The topic has never stopped fascinating me, and the history of this venerable industry is one in which I’ve been proud to play a role. Congratulations, JCK, on 150 years of doing the right thing, and thanks for giving this rookie a chance and a future.