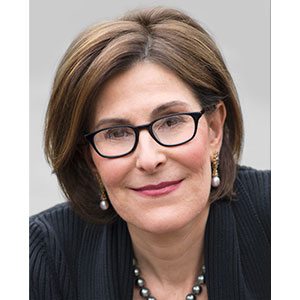 This week we hear from Esther Fortunoff, president of Fortunoff Fine Jewelry.

Esther Fortunoff: Fortunoff as a brand goes back almost 100 years. We were founded in 1922 in Brooklyn. But the jewelry part of our business really got going after my mother Helene married my father Alan and joined the business. She introduced jewelry in 1957. I joined my parents in the business in the late 1970s, as they were opening up on Fifth Avenue and expanding beyond our superstore in Westbury [on] Long Island.

I remember the heady days during the jewelry industry’s most recent boom years in the last decades of the 20th century, when there would be customers eight deep at the counters at Fortunoff stores during the holiday season—at our store on Fifth Avenue, as well as our stores on Long Island and in New Jersey.

Today, those crowds are more likely to browse our inventory online at FortunoffJewelry.com, where they can check out the variety before shopping in store. Luckily, fine jewelry is a category where seeing it in person and trying it on matters, so we do still get a chance to interact with a lot of our customers in person. But we also communicate quite a bit with them on our social media pages. It’s great to have these one-on-one conversations online, and we can answer a lot of questions about our jewelry there.

I remember my mother Helene marking up the pages of JCK and then passing on dog-eared copies to my sister Ruth and me and to all of our buyers. She wanted us to pay close attention to the articles, the trends, and the growing designer jewelry movement. Today, I still do the same thing with my team, but I also tend to do it via email, by passing on interesting articles that I see at JCKonline.

JCK has been a constant presence in our stores over the years. The photos of featured items in JCK were always of interest to me and our team. Since the recent redesign of the magazine, it’s been inspiring me even more. When we’re on our way to trade shows, we don’t leave home without it! We start on the plane, and then keep our copies in our bags throughout! That’s been a constant.

Facts I can trust. Ethical reporting. Analysis that helps me make decisions in my business. Though we’re young compared to you, Fortunoff Jewelry appreciates brands with history, and we’re very glad to congratulate JCK on its 150th anniversary. Thanks for always being there for all of us retail jewelers.