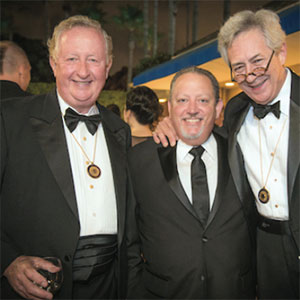 This week we hear from Frank Dallahan, former publisher of JCK magazine, and current partner and copublisher of The Retail Jeweler.

Frank Dallahan: My career in the industry began in 1974, when I transferred from Lenox China & Crystal to the newly acquired jewelry division, ArtCarved Engagement and Wedding Rings. I came on board as vice president of sales and I remained at ArtCarved for three years and was then promoted to vice president of marketing for Lenox.

I left Lenox three years later to join Kurt Gutmann Jewelry as president and was able to experience an entirely different segment of the jewelry business—importing gold jewelry from Italy and Germany.

After four years at Gutmann, ArtCarved called me back to eventually become president of both ArtCarved and Keepsake. Lenox acquired Keepsake and forced the merger of both businesses. It was not a successful combination, and eventually Keepsake was closed and shortly thereafter ArtCarved was put up for sale.

ArtCarved Bridal and the ArtCarved School ring divisions were sold to a Texas investment group. I remained with ArtCarved for another year to aid in the ownership transition. I then took a position with Krementz & Co. to lead the bridal jewelry division. Three years later, the division was sold to Frederick Goldman, and once again I looked for a new challenge. I found it at Diamonique division of QVC, where I learned a whole new industry. The Diamonique post was short-lived and ended two years later when my boss, Joe Segel, was fired. My termination came swiftly thereafter.

My next challenge was to take the reins of the William Schneider Co. and lead it out of bankruptcy. I accomplished that goal within a year and then proceeded to sell the business to Aurafin. As a result of my membership on the JCK show advisory board, I met both Rick Bay and George Holmes at an advisory board dinner in New York. They invited me to JCK headquarters to discuss a possible job opportunity. I accepted the job offer to become executive director of trade relations, reporting to Rick Bay, the publisher of JCK magazine. I moved up the ladder at JCK to become associate publisher and finally publisher. I held those positions from 1997 to 2004.

I resigned from JCK, and several months later was offered an opportunity to become president and CEO of MJSA. I spent two years at MJSA reorganizing the business and moved to AGS Laboratories as president and CEO. The financial crisis of 2008 brought the lab’s business to a low point, and the board asked me to resign.

My wife and I returned from Las Vegas to Stone Harbor, N.J., where three months later I was offered the opportunity to join The Retail Jeweler as a partner. Since 2009, I have served as copublisher of The Retail Jeweler magazine.

How is your extensive resume indicative of larger industry changes?

My resume is a picture of changes thrust on the American jewelry manufacturing business in the ’70s, ’80s, ’90s, and the early part of the 21st century. All of the businesses I worked for were family owned. As the heads of the families reached that certain age, they began considering selling the businesses. Many had no qualified children who could step in and take over and manage what were good-size businesses. At the same time, the India and China were coming into the picture and began acquiring American jewelry businesses, which had significant distribution in the U.S.

How the industry has changed in the last 30 years?

At the time, there were nearly 40,000 retail jewelry stores in the U.S. Today, due to consolidations, mergers, and retirements, there are roughly 18,000 independent retail jewelry stores doing business today. The chain stores Sterling, Kay, Jared, and Zales along with others like Helzberg and Ben Bridge have changed the nature of the sales process between buyers and sellers.

Today, the business has become more of a program-selling proposition rather than selling based on product design and product knowledge. Program selling is more a guaranteed sales plan of the lines offered by manufacturers. The purpose of these arrangement is to reduce the risk of purchase and inventory commitment to the retailer.

The manufacturer, on the other hand, is put in a position where it bears the financial risk of product design, development, sales, and ultimately the return of nonsalable product. This requires the need for larger, more financially strong, and capable manufacturers—and the margins to reflect the added costs of dealing with returns. At the same time, buyers have become less attuned to the product salability at retail and focused more on computer reports, much as a dispassionate financial analyst might.

Talk about your experience with and at JCK.

I joined JCK magazine in 1997. The opportunity came as a result of the decision of the then publisher, Charles Bond, to leave JCK and start a new trade publication, Professional Jeweler. His decision resulted in many of the members of the JCK staff joining him in his new venture.

My initial job was to be the public face of the magazine to the trade and to work with the executive staff of Reed Elsevier shows that had assumed the responsibility for the JCK show. I traveled extensively and represented the magazine at virtually every industry function. My background was unique because I’d been in the manufacturing segment of the business for over 20 years and was familiar with both the retailers and manufacturers in the jewelry community.

About a year after joining JCK, I was appointed to the position of associate publisher and assumed a line position working with the JCK sales team. My background in the industry was in sales and marketing, and consequently the move to this position made a great deal of sense.

Approximately a year later, I was appointed to the position of publisher of JCK magazine, a position I held until July 2007, when corporate made the decision to relocate the magazine to New York City.

Throughout my experience at JCK magazine, I wrote a column for every issue entitled “Counterpoint.” It was an opinion column focused on situations in the industry. “Counterpoint” gave me the opportunity to write for a respected, well-known industry publication. It was the springboard to writing in the MJSA publication—The MJSA Journal—and for the American Gem Society.

JCK magazine enabled me to stay connected with the jewelry industry, but in a much different role. The magazine was influential in that it covered a myriad of topics of interest to the jewelry business.

The seven years I spent with JCK were some of the most positive, productive, and pleasant years of my work experience. The friendships I made with Rick Bay, George and Debbie Holmes, and many of the other JCK staffers and sales team are fond memories, indeed.

I believe that the magazine has lost some of its focus with the elimination of a number of editorial positions, such as watches and colored gemstones, along with the use of freelance writers who have an arm’s-length relationship with the jewelry world.

JCK magazine remains a significant influence in the jewelry industry to this day through the magazine and probably more importantly, the JCK show.

Catch up on JCK’s 150th interviews: