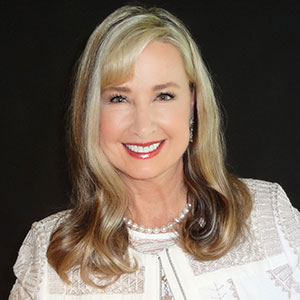 Dallas Prince: My introduction into the the jewelry industry was through a very unique “side door” that opened into a dream come true. My career at that time was in television and film—in front of the camera as a news anchor and behind the camera as an art director.

As the door was closing on a long-running show, I was offered an opportunity to redesign the on-air graphics and sets for a small television shopping network, which seemed like a short-term position, but I loved the atmosphere.

As fate would have it, I was asked to stand in for a host that could not make it for the show, so I threw on an earpiece and a young man fed me the details and pricing until the show was over. It was the most exciting hour of television for me ever, and I loved every single minute. A few weeks later, I had my own show and never looked back. That was almost exactly 20 years ago!

At that time, something called the World Wide Web was just getting started, and I had been one of the news anchors to introduce it, so I was prepared for a few exciting opportunities. But I never could have predicted how my life was about to change. With every passing show, I was developing an arsenal of designs that I knew would increase my sales. And my passion for jewelry design was born.

As my career in the television home-shopping industry was growing, so was my confidence in the jewelry industry. The jewelry industry is the most complex, unique, multicultural phenomena in the world, and everyone involved respects each other for what they bring to the table. A handshake is still considered your bond. I love this industry.

Although my career is now at 20 years, my experience with JCK magazine is more recent. Not many people in the jewelry industry knew me outside of television, so my husband, who is also my business partner, thought we should investigate other opportunities. We decided to take a booth at JCK Las Vegas and roll the dice (no pun!).

Our only acknowledgement at that time was an AGTA Spectrum Award in 2013, but that was enough to get us in the door. At first, I felt like a fifth grader in high school, but when JCK magazine editors came by and looked at a few of my designs, I felt was an immediate sense of accomplishment. We wrote only three small orders in that show, but JCK had come by our booth! From that moment on, I wanted to make sure that I had something fabulous to show them at every show!

The history behind JCK is very unique. It is considered the “gold standard” for our industry. I have saved countless issues to stay informed. After exhibiting for two years at JCK Las Vegas, I had the good fortune of being recognized with a JCK “Best of the Best” Award for ring design. Just having that stamp of approval by the retailers was such an honor.

Since then, JCK magazine has validated my brand with quotes, photos, and recognition for even more designs—and I’m still excited every time [its editors] come to my booth. JCK has changed the perception of my brand in this industry, giving me a new forecast for the future—and it’s brighter than ever.