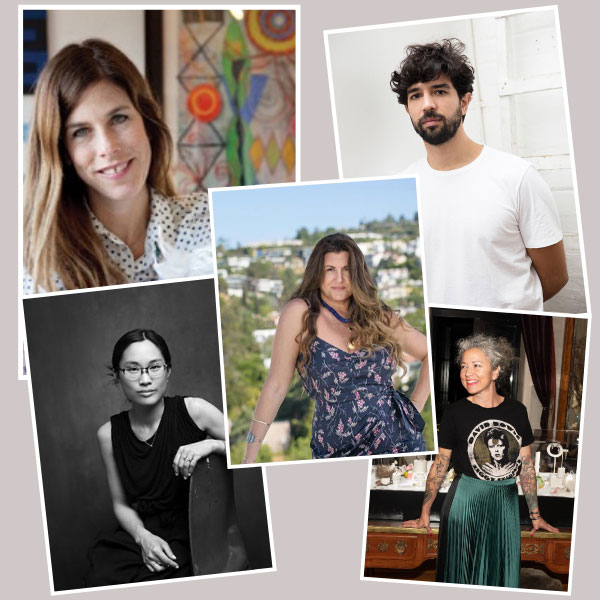 Establishing this list was a group effort among JCK‘s editorial staff; many of us have been covering jewelry in some form or other more than 20 years. The internal debate as to who should be included was lively, but in the end we forced ourself to be faithful to our criteria.

Which was jewelry designers who: emerged during this decade with a memorably unique voice and sustained it across several subsequent collections; made important contributions to the era’s most timely conversations; or rose to significant acclaim with increased red carpet visibility or a robust social media and/or celebrity following.

The rest unveiled collections that set the agenda for their jewelry- designing peers (and in some cases were widely copied). In any event, some of the decade’s biggest trends can be traced back to their fine work.

We’re confident in where we’ve landed, and we encourage you to mention the designers that defined the decade for you in the comments.

“My customer is a woman buying the jewelry for herself. I feel like she really connects with the jewelry on an emotional and artistic level, which brings me great joy, truly.” Los Angeles–based designer Irene Neuwirth shared this perspective with JCK on the occasion of its 150th anniversary this year. One of the first times we wrote about her was back in 2011, in which we alluded to her love of colored gemstones, particularly opals (a passion that has remained a constant in her work). Neuwirth, a member of the Council of Fashion Designers of America and a nominee for Best Accessories Designer in 2015, told us then that her personal motto was “there’s no time like the present,” and, doubtless, her time is now—largely informed by a major celebrity and stylist following. Her most memorable red carpet moment of late was the ruby tiara she designed with Gemfields for actress Ruth Negga for the 2017 Oscars. Since then, she has appeared on everyone from Julia Louis-Dreyfus to Rachel Brosnahan and Regina King.

With ethical stone sourcing, recycled metals, and other green materials being some of the decade’s hottest topics, we thought of Melissa Joy Manning, who has been at the forefront of the movement long before it became buzzy. She is, in fact, the cochair of the CFDA’s sustainability committee. Her big moment this decade was the launch of her fine jewelry collection.

“Part of moving into ‘fine’ is embracing my maturity as a designer,” she told JCK in 2018, “working with vintage and reclaimed stones to create pieces that can be passed down and worn forever. I always wanted to build a brand that had influence…not just in terms of what people bought, but how they think.”

London-based, Brazilian-born designer Fernando Jorge made his unofficial Couture show debut in 2013, with help from veteran Brit designer Stephen Webster. Four years later, he was winning an award at the same show in the “Best Diamonds Above $20K” category for his undulating, light-as-air Disco earrings. The full collection associated with this piece was picked up by Barneys New York that fall. “There is a language here that I definitely want to grow,” he told JCK at the time.

Every JCK editor has been all ears ever since, and the industry has embraced his work as well (he won the Jewelry Design Award at the 2019 Gem Awards).

JCK ran one of its first editorials on Suzanne Kalandjian in 2012, but the importance of her brand, Suzanne Kalan, which she now runs with her daughter, Patile, reached its pinnacle with the launch of the award-winning Fireworks collection in 2015. Centering on scattered arrangements of baguette diamonds, and later colored gemstones, it made baguettes seem cool to a younger generation of jewelry lovers. This look has become the brand’s signature and has also come to influence the work of other designers in myriad ways, thus making baguettes and other step cuts one of the decade’s most identifiable jewelry trends.

The Amalfi collection from 2018, which Brittany Siminitz covered, exemplifies the full expression of Suzanne and Patile working in tandem as a creative team. Last summer, I highlighted Suzanne Kalan’s foray into hair accessories, noting that it offers “her legions of fans yet another way to incorporate her wildly popular, hugely admired Fireworks collection into their looks, from everyday to special occasion.”

Indian jewelers gained recognition in the United States in a big way this decade—the general opulence of the designs refers back to the Mughal period, a heyday for Indian jewelers catering to the maharajas of the day. The 33-year old, Jaipur-based design house of Amrapali has been on our radar for a while, but it really caught our attention in 2012, and by 2013, Brittany Siminitz declared the brand “a red carpet regular, accenting the couture gowns worn by a list of celebs, from Gwyneth Paltrow and Freida Pinto to Selena Gomez and Taylor Swift. The jewels are always statement-making, rich with colorful gemstones and luxurious detail.”

I spoke with Siminitz recently about the significance of Amrapali over the last decade, considering how many other Indian jewelers we have covered over the last 10 years (Sutra, Hanut Singh, Sanjay Kasliwal to name a few…), and she put it this way:

“It’s brought Indian jewelry to the forefront of internationally appealing design. Much of its offerings are inspired by Indian tribal art and artifacts (and many of its high-end pieces crafted with ancient Indian techniques), but these styles have global appeal. You think ‘Indian jewelry design,’ you think Amrapali—but founders Rajiv Arora and Rajesh Ajmera have grown their brand to mean so much more than that.”

There’s a reason we put a pair of the Brazilian-born, New York–based designer Ana Khouri’s earrings on the cover of our 150th anniversary issue as a representative of the decade 2010–2020: Her artfully spiraling, gem-encrusted work, especially her edgy ear cuffs, is fantastically modern, sculptural, and luxe. There’s also the complex way the designs highlight the curve of an earlobe or sit off-center along the collarbone. Many designers of this era have played with asymmetry and mismatching, but for Khouri, it feels innate and essential to her aesthetic. Many editorial authorities have likewise identified Khouri as an innovator.

“You have to strip away the nonessential, distill what remains into its pure form, and channel only that energy essential to who you are in your work,” Khouri said in my coverage of her Paris Haute Couture Fashion Week presentation in 2018. Her latest collection includes several designs made with Gemfields emeralds.

The alternative bridal marketplace has become especially crowded over the last decade, with a seemingly endless supply of studio jewelry designers turning out engagement rings set with Montana sapphires; rough-cut diamonds in gray, brown, and champagne hues; salt-and-pepper diamonds; plus reclaimed old miners and other vintage cuts. But around 2010, New York–based designer Anna Sheffield was among the first to reimagine what an engagement ring could look like, favoring exotic cuts, black diamonds, and designs that felt glamorous but not flashy, handmade but elegant and polished, not quite rustic. As JCK‘s Emili Vesilind has observed, “The designer makes an emerald-cut rutilated quartz feel as glamorous as a 2 ct. diamond.”

Since launching her line in 2013, Brooklyn, N.Y.–based designer Wing Yau of Wwake helped solidify two enduring trends of the decade: dainty proportions (itty-bitty studs and blade-thin rings and chains) and opals. Yes, other jewelry designers have made opal their thing (see Irene Neuwirth up top), but Yau is noteworthy because she was able to make them accessible to younger clients with modest budgets. Her solution: tiny, tiny opals, which inspired her fans to collect her pieces and become full-on opal addicts. Over the last few years, Yau has been on trend but stays true to her signature. Her millennial customer is growing with her—she is experimenting with bolder looks at higher price points, but “delicate” seems to be her true north.

This decade, vintage jewelry was all the rage, particular charms imbued with symbolism and sentimentality, embracing all manner of astrological, good luck, and good-vibes only themes. Or ones that spoke to, and reflected, something unique to your personality. Seizing this moment in 2015, New York–based designer Beth Bugdaycay had one of the most successful jewelry launches of the decade with a line of modern heirlooms that feature mystical and spiritual symbols that evoke notions of protection, strength, karma, and dreams. “I use symbols to express that we all have the ability to change and the capacity for growth,” she told JCK at the time.

In addition to popularizing talismanic jewelry, Bugdaycay also elevated it by adding colorful chanplevé enamel and gemstones and expanding her line to include not only charms and medallions but also cigar band–inspired rings, earrings, and objets vertu. (We featured a gorgeous Foundrae wine stopper in this roundup of prepackaged gift sets earlier this month.)

We believe Bugdaycay can also be credited for helping to fan the flames of another big trend of the decade: colorful enamel used in fine jewelry. Of course, this technique has been in use for a gazillion years, but Foundrae’s appealing applications exposed her peers to the possibilities and made it feel newly desirable to ladies who love color.

“If you’re not part of her tribe of hard-core jewelry worshippers, you will be soon,” JCK said of L.A.-based designer Jacquie Aiche back in 2014. Six years later, her boho luxe aesthetic has plenty of celebrities, editors, and influencers worshipping at the altar of her brand, which blends traditional jewelry materials (diamonds, gold) with one-of-a-kind gems, fossils, and agates.

The epitome of California cool, Aiche has unveiled several standout collections in recent years, including headpieces, bras (yes, bras), designs centered on the beguiling possibilities of opal inlay, and a self-care line. As we move into 2020, we’re getting a clear lifestyle brand vibe, as evidenced by her recent opening of the Bungalow, a workspace for the Jacquie Aiche team that also serves a center for her tribe offering a respite for the mind, body, and soul with energy readings and cleanses performed by a spiritual mystic, plus a range of healing, nurturing spa treatments.

The power of Instagram revealed itself mightily throughout this decade, and designers with a strong celebrity following were able to announce sightings of the era’s beauties and trendsetters wearing their jewels on a 24/7 cycle. Which may explain part of why New York–based jewelry designer Jennifer Fisher has become a household name among those who track the movements of Lady Gaga, Michelle Obama, Rihanna, Cardi B, and, perhaps most importantly, longtime fan Jennifer Lopez.

Fisher’s dog tags put her on the map, and now, and perhaps forevermore, it’s all about her hoops, which have become the ultimate cool-girl wardrobe essential: oversize and glamorous, knife-edged, hammered, petite, you name it. The whole notion of an “ear party”—the more piercings the better—emerged during this decade, and there’s no question: Jennifer Fisher continues to nab the best seat at the bar.

“The Samiras are, at their core, basic hip-hop-inspired gold hoops…but J-Lo and Selena Gomez wear them, and Fisher herself models them in cool and interesting ways on Instagram. Faced with these visuals, the consumer starts to see them as more than basic gold hoops. They fly off the shelf at $500 a pop because fashion fans want to be a part of that Samira tribe.”

Count us among them!