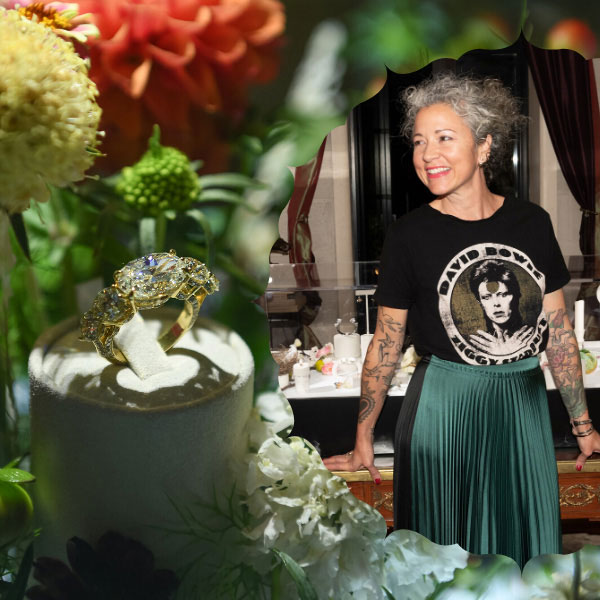 JCK has called her a rebel and an “early advocate of alternative bridal design.”

We’ve observed that she’s “a born storyteller, through both her jewelry and her knack for personal narrative” and described her engagement rings as having “cool-girl cachet…for brides who prioritize good design over bling factor.”

And all of these things remain part of jewelry designer Anna Sheffield’s truth. In fact, earlier this month, the New York–based designer held an event to celebrate the first 10 years of her fine jewelry business. Reflecting on this occasion, she said that while her aesthetic and design process have changed very little, “I think that I have become more confident in the last 10 years with the materials. I started with really dainty designs and worked into more elaborate ones. And now I have the ability to work with larger diamonds and more interesting stones that I often collect and hold on to for some time before the right moment presents itself.”

Which may be why she decided to really go for it in the design of the Ashara Bea, a version of one of her most popular engagement styles, the Bea, writ large: The design contains 10 cts. t.w. of diamonds in recognition of her brand’s 10-year journey,

The ring was unveiled at the 10 Years of Anna Sheffield Fine Jewelry event alongside a a retrospective of notable designs from the past decade.

Looking at these, as well as the newest additions to the bridal line, there’s a clear continuity, which says as much about Sheffield’s customers as it does about her work. “I feel that, fundamentally speaking, the customer has not changed much in 10 years,” says the designer. “There is an inherent desire for something unusual but timeless, meaningful and considered, but not the status quo. And I’ve been aiming to make engagement rings and bands for people who are looking for just that. The larger goal is to grow the offering to include styles that entice new customers as well as to serve our existing clients when they are ready for something new.”

And what’s on the engagement ring agenda for 2020?

“We are definitely seeing more interest in colored stones, whether precious or semiprecious, and that’s exciting actually,” says Sheffield. “I’m always looking for new stones to include in the offer, and our customers seem to be very open to color in ceremonial jewelry.”