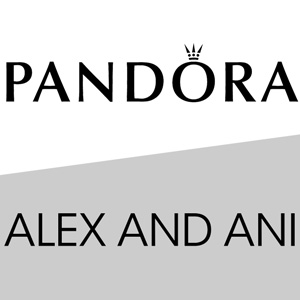 Pandora and Alex and Ani have traditionally looked at each other as competitors, sometimes bitter ones. Yet, as the two charm companies have tussled with each other, and trimmed independent retailers from their distribution channels, the overall charm category has stagnated. This year we saw reports that charm sales had fallen at Signet and in the industry generally.

While Pandora and Alex and Ani are both well-known and successful companies, they are also both going through some pretty tough times. Alex and Ani’s recent lawsuit against Bank of America (BoA) asserts that, for the last six months, the bank has been “driving Alex and Ani toward bankruptcy” following a purported loan default (which it claims didn’t occur). BoA responded that Alex and Ani has had “serious financial issues for nearly two years.” If this issue isn’t settled, it will likely need a new source of financing.

Pandora’s situation isn’t as serious, but it faces challenges as well. Sales have been disappointing, and it’s in the midst of majorly overhauling its business plan. There’s been heavy churn in its C-suite; the company is now on its sixth chief executive officer in the last nine years.

Pandora still sells an enormous amount of charms, but it seems to target a mostly older demographic. Way back when, it was considered a millennial brand. But it has increasingly pitched itself to moms and associated itself with family brands such as Disney and the Rockettes. Nothing wrong with that, of course. It’s not cool, though. That’s probably why it became fodder for a Saturday Night Live parody.

Lately, Pandora has tried to reverse that: It’s worked with Colombian singer Shakira, and this week it announced a partnership with actress Millie Bobby Brown (pictured below), who plays Eleven on Netflix’s Stranger Things. But once your brand gets tagged as uncool, that’s hard to come back  from, hot celebs or no. I’ve long thought that for Pandora to really grow, it needs to start another, hipper, younger-skewing brand. Or, perhaps, buy one.

Which brings us to Alex and Ani. Pandora is a brand built by passionate people, but it has seemed mostly soulless since its 2010 IPO. A lot of its top execs have come from outside the industry—from sectors ranging from shoes to food to tobacco—and they rarely stay more than a few years. By contrast, Alex and Ani has a distinct personality—a quirky one. Its inventory is blessed by shamans, and numerologists reportedly help choose its store locations. It has also donated an amazing $50 million to charity since its founding.

Yet while it also sells an impressive amount of product—the lawsuit calls it a $1.2 billion company—it, too, seems to have a turnover problem. While founder Carolyn Rafaelian has served as CEO since 2014, there have also been four chief financial officers in the last six years and two presidents since 2015. (The latter role is now unfilled.) While researching this post, I found a 2014 article announcing seven new hires at the company. Based on LinkedIn searches, it appears at least six of those people have left.

While the two companies are different, in broad terms they complement each other. Pandora wants to “bring back passion.” Alex and Ani has a surfeit of soul. Pandora attracts older consumers. Alex and Ani appeals to younger ones. Pandora has always stressed its craftsmanship. Alex and Ani has been about the meaning behind the piece. And while they vary on price points, they both have similar distribution models and, sometimes, the same retail customers. Pandora has an international reach that Alex and Ani doesn’t, so it could help usher it into new markets. Alex and Ani has secured some great licenses—from Harry Potter to Game of Thrones to, most recently (and somewhat surprisingly), the ’90s sitcom Friends. Pandora hasn’t been as license-focused, and yet its linkup with Disney has clearly been important to the company. Alex and Ani has done a great job of working with influencers and viral marketing. Pandora, by its own admission, is playing catch-up on that.

Now, given that Pandora has had to cut costs to fund its new initiatives, a merger may not be possible. Its top brass may want to fix their own company before looking at a new one. And a lot of mergers that look good on paper fail in reality.

But who knows? Pandora and Alex and Ani are both great brands, two of the best ever in this industry. Now, the entire charm category seems, as the theme song to Alex and Ani’s latest license puts it, stuck in second gear. It hasn’t been these two companies’ day, their week, their month, or even their year. It might be time for these longtime enemies to become friends.