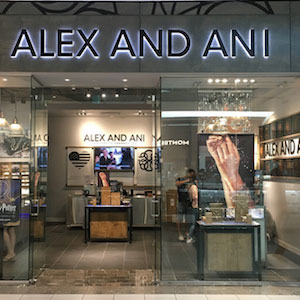 As part of a distribution overhaul beginning in 2019, Alex and Ani will sell more of its product through proprietary channels and less through independent jewelers and mass merchants.

While the Rhode Island–based brand doesn’t plan any changes in the current year, it will likely cull the number of jewelers it sells to in 2019 and beyond, says Dani Marks, senior director of brand marketing.

“We are stepping away from the traditional footprint and distribution model,” she says.

At present, 50–55 percent of Alex and Ani’s revenue comes from its concept stores and its website. The brand hopes eventually to grow that to about 80 percent. As part of that, it will open from 25 to 30 concept stores within the next year.

The brand is currently sold at 1,800 independent jewelers in the United States. And while it doesn’t have a new target number, that number will likely shrink, Marks says.

She stresses that Alex and Ani still plans to sell to some independents and department stores. Over the next year, it will have “conversations” with its current retailers about whether they can forge a “partnership” with the brand, she says.

“We want to work with the best partners that we possibly can. It’s not about retailers putting a certain amount of product in their stores. It’s about how we collaborate today to optimize our audience. It’s moving more to a partnership model from a pay-to-play model.”

She notes that the company is moving toward “experiential retailing,” as evidenced by its new Warrior of the Soul jewelry collection, which spotlights real-life people making a difference.

Alex and Ani’s move is in many ways similar to what charm brand Pandora did in 2016, when it cut a large number of its independent accounts.

While Marks didn’t feel that was an apt comparison—“Alex and Ani is unique,” she says—she does think the move is necessary for the company to have greater control of its brand.

“The more partners we have, the more we lose control of what we are saying,” she says. “We are going back to our roots of having a more direct relationship with the consumer. We know our customers so well, and our products are part of peoples’ lives. We want to control the conversation we are having with them.”