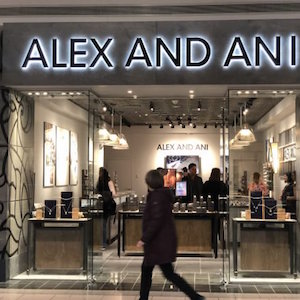 Alex and Ani is being bled dry by the Bank of America, after the lender last year said it defaulted on a $50 million credit line, according to a complaint filed in Southern District of New York federal court on July 25.

“[F]or more than six months now, Bank of America has been both driving Alex and Ani towards bankruptcy and milking it for tens of millions of dollars in fees,” says the complaint, filed on behalf of Alex and Ani and A and A Shareholding Co.

The lawsuit claims that, in 2016, Bank of America granted Alex and Ani a $170 million term loan, which included a $50 million credit revolver. The loan was used in part to finance the company’s $100 million purchase of its main production facility, Cinemera, which reportedly had been owned by the family of Alex and Ani founder and chief executive officer Carolyn Rafaelian.

But in December 2018, the bank claimed the Providence, R.I.–based charm company defaulted on the credit line. Alex and Ani complains the notification came “with no warning, and in breach of [the bank’s] contractual obligations.”

It now asserts the default was “made up” and “fraudulent”—and was based on the technical question of how it classified an $8.73 million payment associated with the Cinerama purchase.

When it complained to Bank of America, the lender “wouldn’t listen—another breach of its promises to Alex and Ani,” the filing says.

The bank’s declaration means that Alex and Ani now has to pay extra fees and interest, and it has lost access to its main credit source, it says. As a result, Alex and Ani’s payments to vendors are on average 81 or more days late, and it has close to $16 million in outstanding payables.

“Alex and Ani…is still successful and profitable outside of Bank of America’s shenanigans,” according to the complaint. “Bank of America’s actions over the past few months—starting with a made-up default, and culminating in a deliberate plan to starve Alex and Ani of credit from any source—have sent a once-thriving American success story into a death spiral, with 1,500 jobs potentially in the balance.”

The suit blames the bank’s actions on “greed and sexism.”

It notes that, in December 2017, Alex and Ani appointed Andrea Ruda as its chief financial officer, replacing Bob Woodruff. She aggressively cut the company’s payroll and other costs, the filing says.

“Ruda’s actions quickly shored up Alex and Ani’s bottom line—ostensibly protecting Bank of America’s investment,” according to the suit. “But there was one issue: Ruda is a woman.”

The suit claims that Bank of America executives have issues with the “triumvirate of strong women” who head the company—Rafaelian, Ruda, and senior vice president of branding Kate Robinson.

The filing says that Bank of America has repeatedly pressured the company to hire a chief restructuring officer or outside consultant—but “Rafaelian and her executive team were not interested in paying third parties to perform work that Ruda was already doing very effectively.

“The endgame is clear: Bank of America wants the women out of power at Alex and Ani,” it continues, noting the bank has paid $210 million in discrimination settlements since the year 2000.

Bank of America did not respond to a request for comment. However, spokesperson Bill Halldin told Bloomberg that Bank of America was the administrative agent for a group of seven banks behind the loan.

“As the complaint itself notes, the company has faced serious financial challenges for nearly two years,” Halldin said. “The banks have worked closely with the company during this time. Bank of America’s demonstrated record of support for diverse businesses is well-noted and widely recognized.”

The case was filed by Harmeet Dhillon, who was under consideration to head the U.S. Department of Justice’s Civil Rights Division under President Donald Trump, according to Bloomberg.

Ironically, in 2017, Alex and Ani’s former director of retail operations sued the company, claiming he was discriminated against based on his gender and religion. The company denied the charges, and the parties agreed to dismiss the suit in October 2018.

In 2014, Bank of America spotlighted its partnership with Alex and Ani in a commercial.