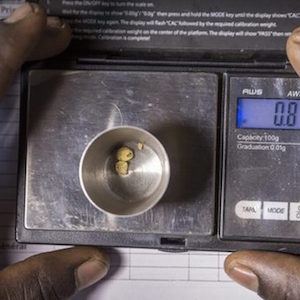 This week, U.S. Customs and Border Protection (CBP) announced it would hold any shipment believed to contain diamonds from the Marange region of Zimbabwe, and gold from the Democratic Republic of Congo (DRC), due to information that forced labor was used in their production. U.S. law prohibits importation of products made using forced labor.

The CBP’s detention order means it can confiscate shipments believed to contain either of those two products until importers prove they are forced labor-free. To do that, they must “submit evidence to CBP that supports their contention in accordance with 19 C.F.R. § 12.43,” a State Department official told me.

That section requires the importer to submit certification

More information on the CBP’s procedures regarding withhold release orders can be seen here.

This is clearly a serious topic, which deserves serious consideration. Most people don’t want to sell items produced by slaves. But, for now, these orders are raising more questions than answers. (The CBP did not respond to inquiries by press time.)

The main question is how the agency plans to enforce this, since most diamonds and gold aren’t labeled by origin.

Customs has said that it gathers information from various sources, including “news reports and tips from either the public or trade community.”

Looking at the gold question, the Enough Project, a nongovernmental organization (NGO) active on this issue, told me there have been “many” reports charging certain refiners with melting DRC conflict gold—which often involves forced labor. The question is whether CBP is willing to make the effort to track the companies that buy from those refiners.

The irony here is that there is one type of gold that is specifically—even proudly—labeled as being from the DRC: Just Gold.

Just Gold, which JCK profiled here, is a fair trade–type product that is being overseen by Impact, the Canadian NGO formerly known as Partnership Africa Canada. Just Gold is tracked and traced from the mine through the smelter. It is produced according to audited standards, which, naturally, prohibit forced labor.

Just Gold is a worthy project that helps miners in a poor, war-torn country. It could (or should) answer suppliers’ concerns about gold sourcing, especially now that it’s becoming obvious that just using “recycled gold” is not a catch-all solution.

However, the new CBP edict will likely make it more difficult to import Just Gold.

In theory, the order means that any Just Gold shipment can be held at the U.S. border—and that the importer will have to show evidence, every time, that no forced labor was involved. And while Impact says it can provide that proof, having to offer it repeatedly could be a major hassle.

“We’re still trying to understand what exactly the implications will be for buyers trying to bring in gold from the Just Gold project,” says Impact spokesperson Zuzia Danielski.

For this reason, Impact has criticized the CBP edict—warning that it could stigmatize the country’s gold production, and hurt the Just Gold program as well as other efforts to produce non-conflict gold from the DRC.

Indeed, Sect. 1502 of the Dodd-Frank Wall Street Reform and Consumer Protection Act, which required public companies to report whether they source conflict gold from the DRC, had a devastating effect on the country’s mining.

For a long time, the U.S. government has insisted that it does not have sanctions against diamonds from the Marange region of Zimbabwe. (Following an outbreak of violence in Marange, diamonds from that area were banned by the Kimberley Process from 2009 to 2011.)

That said, Zimbabwe Consolidated Diamond Co. (ZCDC), which is currently the dominant diamond miner in Marange, is 100% owned by the Zimbabwe Mining Development Corp. The latter company has been listed as a specially designated national by the Office of Foreign Assets Control (OFAC).

That effectively means that ZCDC diamonds, and therefore most diamonds from Marange, are banned from the United States. (JCK has never heard of this ban being enforced.)

It is possible that some Marange diamonds are not mined by the ZCDC, and therefore might not be subject to sanctions. Generally, however, ZCDC is believed to run the show in Marange.

In any case, it seems strange that after years of the U.S. government stressing this (legitimate) distinction between miner and mining area, the CBP order has muddied the waters by specifically targeting diamonds from Marange, the region.

As the spokesperson for the U.S. embassy in Zimbabwe told the local press yesterday, importers of Marange diamonds can submit proof to the CBP that no forced labor was involved. Still, the order is clearly punitive in nature, as there is a presumption of guilt. And even if the importer does prove there was no forced labor used in the Marange shipments, the diamonds still may be subject to the OFAC ban.

What makes this stranger is that, while local Zimbabwe NGO Centre for Natural Resource Governance has made many quite serious accusations about human rights violations surrounding Marange diamond mining—some of which were recounted here—it also cast doubt on the forced labor charge.

“As an organization which has been working in Marange for 8 years, CNRG has never come across cases of forced labor,” it said in a tweet. “The main challenges are human rights violations and lack of transparency.”

As an organization which has been working in Marange for 8 years, CNRG has never come across cases of forced labour. The main challenges are human rights violations and lack of transparency.@KPCivilSociety1 https://t.co/LITj2awwWh

Zimbabwe’s government and ZCDC have also denied charges of forced labor in Marange.

There are many reasons why U.S. companies should avoid Marange diamonds—with the OFAC sanctions probably topping the list. But it now appears that forced labor, the reason cited by CBP, may not be among them.

It is conceivable the CBP’s policy could change. “The [withhold release order] may be revoked if there is evidence that the use of forced labor has ceased,” the State Department official told me.

Whether or not the CBP got the problems in Marange exactly right, James Mupfumi, director of Centre for Research and Development, another Zimbabwe NGO, said he hoped the move would be a “wake-up call” to Zimbabwe’s government to improve transparency and standards in its diamond sector.

It should also be a wake-up call for our industry that sourcing issues are not going away. In fact, they are becoming more important.

The U.S. government has made it clear that it wants all industry sectors to do a better job in tracking their supply chains, and to ensure that they are buying materials from legitimate sources that, among other things, do not use forced labor or violate human rights. The current administration has hinted it might use strong tactics to make that happen. This may be just the first in a series.

How the jewelry industry can track its materials was discussed in this article, which includes resources for retailers and manufacturers, as well as on the latest episode of JCK’s podcast, The Jewelry District.