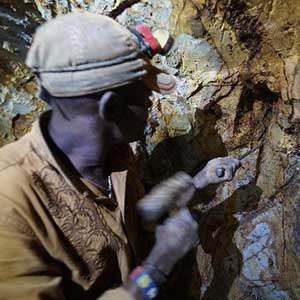 The first shipment of certified conflict-free artisanal gold from the Democratic Republic of Congo (DRC) has been exported to the United States, according to a statement from Responsible Artisanal Gold Solutions Forum.

Fair Congo, a for-profit company owned by a local NGO, exported the gold from the war-torn South Kivu province. It was then melted by Asahi Refining, manufactured into earrings by the Richline Group, and sold through Signet Jewelers.

This is the first supply chain designed to source conflict-free artisanal gold from the DRC since Sect. 1502 of the Dodd-Frank Wall Street Reform and Consumer Protection Act was ratified in 2014. That section mandates that publicly listed companies who deal in certain minerals, including gold, disclose whether their minerals come from eastern DRC or surrounding regions. It is widely blamed for a drop in the country’s artisanal mining activity.

The program, meant to help establish legitimate artisanal supply chains in the country, was run with the support of the United States Agency for International Development (USAID). More than 95 percent of artisanally mined gold in Congo is excavated illegally and smuggled out of the country, which has helped fuel the country’s ongoing civil war, the statement said.

“This pilot has shown that not only can responsible artisanal gold sourcing can be accomplished in high-risk areas, but it can be done in the most inclusive way with both of the local commercial actors being led by women,” said Adele Gwet, general manager of the Fair Congo initiatives, in a statement.

Added forum member Sasha Lezhnev, deputy director of policy for the Enough Project: “This gold proves that it is possible to source conflict-free, responsible gold from Congo and bring it to consumers. That’s a very important proof of concept. Next, other companies should source responsible gold from Congo, and governments should enact consequences on companies that smuggle.”

Signet and Richline are participants in the Responsible Artisanal Gold Solutions Forum, along with the U.S. Department of State, USAID, the Organisation for Economic Co-operation and Development (OECD), and tech giants Apple and Google.