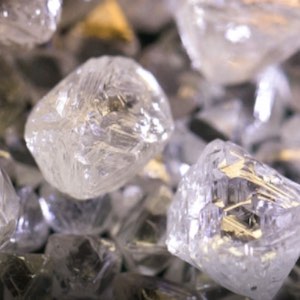 This week, Russian diamond miner Alrosa announced that it had signed a joint venture agreement to explore for diamonds in the Chimanimani area of Zimbabwe.

The announcement was accompanied by an Alrosa slide presentation touting the benefits the world’s biggest miner by volume hopes to bring to the country’s troubled gem industry.

“In 2009, [the] Kimberley Process banned trade of [Marange] diamonds,” it noted. “The ban was lifted in 2011. But Zimbabwe diamonds’ reputation was ruined. Market players traded them reluctantly and with a significant discount.”

In addition to its reputational issues, Zimbabwe’s industry suffers from a lack of technical know-how on everything from excavation to sorting, it adds.

But Alrosa, the presentation says, can provide “an answer to all these questions.” By sharing its industry and technology expertise, as well as know-how in corporate social responsibility and transparent governance, Alrosa can “drive development” in the sector.

One local newspaper hailed this as a hopeful sign: “That a world class company like Alrosa has signed an agreement to be involved in the local market is a ringing endorsement of the world class nature of the local diamond potential and the industry to emerge out of it.”

Yet, at least one Zimbabwe rehab project seems too daunting for Alrosa. It has stressed it would not mine in the Marange region, which houses the country’s largest diamond deposits, producing up to 3.5 million carats a year.

Marange is also where, in 2008, a nasty outburst of violence against artisanal diggers led to an estimated 250 deaths and sparked that two-year Kimberley Process (KP) ban that came close to ripping the certification scheme apart. And while the international spotlight has long since left the area, violence against miners persists, according to the Centre for Natural Resource Governance (CNRG), a local nongovernmental group.

So when The Herald, Zimbabwe’s state-owned newspaper, declared that Alrosa would be mining in Marange, CNRG fretted over the announcement’s lack of transparency.

“Alrosa’s entry into Marange is shrouded in secrecy and this has been the same script that the Zimbabwe Government has used to identify investors for Marange diamonds,” it said in a statement, titled “Alrosa enters Zimbabwe’s Marange killing fields.”

Alrosa, ever sensitive about its image, responded quickly, declaring that it “has never and under no circumstances considered and won’t consider the possibility of entering the Marange region.”

The company declined to elaborate on its reasons for this, but a spokesperson told JCK: “We are confident that the development of new deposits with the help of Alrosa will unlock their huge potential and help Zimbabwe to restore its position in the global market, introduce the best international practices of responsible business and corporate governance, as well as increase the share of local diamonds in global production.”

The current confusion over just who is mining in Marange is the latest chapter in that region’s long, troubled diamond history. Diamond mining has occurred there for the last decade, yet it’s still dealing with the same issues that have plagued it since gems were first discovered there: violence and a lack of transparency, says CNRG executive director Farai Maguwu.

In February 2016, the government evicted seven companies that were mining there and appointed a government-owned company, the Zimbabwe Consolidated Diamond Co. (ZCDC), to take over.

Like its predecessors, the ZCDC’s tenure has been mired in controversy. As it is owned by the Zimbabwe government, its diamonds are subject to sanctions by the U.S. Department of Treasury’s Office of Foreign Assets Control (OFAC), which means they are banned in the United States. In addition, Maguwu says this government-owned entity was created without approval of Parliament, and, like prior miners, has faced questions about its ownership and who is getting the proceeds.

Even more serious, Maguwu charges that ZCDC security forces have acted with excessive force against artisanal miners in the area—the same issue that got Marange diamonds banned from the KP a decade ago.

While many of those artisanal miners are digging illegally, Maguwu argues that many of them are desperately poor, and gem excavation represents their sole source of income—and there is no justification for excessive force regardless.

“They have handcuffed them, they sic vicious dogs on them, some of them have died,” he says.

ZCDC has also been accused of not getting proper environmental permits and forced evictions.

(An inquiry submitted to the miner’s website was not answered. An email to the company was returned undeliverable. Its latest sustainability report can be seen here.)

In response to these controversies, in May the ZCDC fired half its top leadership, including CEO Morris Mpofu, who is currently under indictment. Acting CEO Roberto de Pretto told a local newspaper he hoped to “leave a positive and lasting legacy so that one day, when the Zimbabwe Consolidated Diamond Company finishes mining, people here will say ‘I love this company.’ ”

It might not get a chance. Reports say the company has been saddled with debt and faces possible closure. Recently, state media reported that miner Anjin Investments, which had previously mined in the area, would return to Marange.

A joint venture between China’s Anhui Foreign Economic Construction Group (AFECC) and a division of the Zimbabwe army, Anjin’s return has hardly been welcomed by locals. It has a reputation of mistreating its workers, says Maguwu, and has been accused of polluting the local area. (AFECC did not respond to a request for comment.)

Maguwu also complains of very little transparency about how Anjin won that contract and how it plans to conduct itself. Given its ownership structure, it will also likely be subject to OFAC sanctions, as it was when it worked in the area previously.

Maguwu says that if Alrosa ever changed its mind and decided to mine in Marange, it might improve standards in the area. It might even make the area’s diamonds no longer subject to OFAC sanctions. But for now he thinks the miner is right to shy away.

“[Alrosa’s] high standards could push other players in the sector,” he says. “But the Zimbabwe government is like the Mafia. There is the risk the government won’t allow them to operate according to their standards.”

Which brings up how companies in the United States should react to this. As mentioned, Manage diamonds are still subject to OFAC sanctions, which Maguwu has mixed feelings about.

“I don’t really see much value in the sanctions,” he says. “At the moment they are actually helping ‘the mafia’ to say we can’t sell our diamonds openly, so that’s why we are doing it secretly. I am not saying that lifting the sanctions is going to improve transparency, but at least they won’t have much to talk about regarding why they aren’t transparent.”

Maguwu was heartened when reports appeared in June that e-tailer Blue Nile was not buying Marange diamonds. It wasn’t clear if this was a new policy, or what spurred these reports, as most U.S. companies have long had policies against selling Marange gems, given the OFAC sanctions. (The e-tailer did not respond to a request for comment.)

It also wasn’t clear how it is enforcing this ban, as diamonds are not easy to track. Over the years, the industry has developed a group of diamond-tracking initiatives, including the Diamond Source Warranty Protocol, which was specifically designed to weed out Marange diamonds. Newer technology-based solutions, such as the De Beers–backed Tracr project and the Gemological Institute of America’s country of origin reports, are also popping up, though those are still getting off the ground.

Regardless, Marange diamonds are still being sold somewhere, and Maguwu says the industry needs to be aware that the situation there is still bad.

As head of the Kimberley Process civil society coalition, he’s appealed to the certification scheme to take action, but even ostensibly pro-reform chairs have been indifferent, he says.

“I think the KP is tired of the Zimbabwe issue,” he said. “They know if they hold the government accountable, it will open up a Pandora’s box.”

If the scope of the KP is broadened to include human rights, then issues like this might be covered, but that has not happened, even though the World Diamond Council backs the move.

Right now, Maguwu just hopes the diamond industry will get more involved and outspoken on the issue.

“The industry should avoid Marange diamonds, and they should join us in our call for the Zimbabwe diamond industry to become more transparent,” he says. “I expect people from the industry to verify that what we are saying is true. And if they find that it is true, they need to take action. It makes a lot of difference when the industry speaks up.”