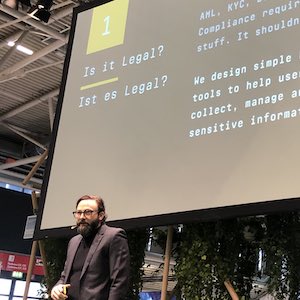 One could see the “green” trend had truly blossomed in the jewelry industry at the Inhorgenta Munich show, which ran Feb. 14–17. Booth after booth boasted of their socially responsible bona fides. A Future of Retail pavilion included a series of sessions devoted solely to sustainability.

“The awareness of these issues has really increased in the industry,” says Yves Peitzner, creative director for Studio Tish, which organized the Future of Retail pavilion. “We have been doing this [sustainability program] for years. This was the first year that it really picked up. People were much more open to it.” (Disclosure: I spoke at this program.)

For longtime advocates of responsible sourcing such as Toby Pomeroy—the man behind the Mercury Free Mining challenge—it was a heartening change.

“It’s so great that people really care about this,” he said at the show. “There is so much interest and commitment.”

But he also recognizes that not everyone who talks about responsible sourcing truly walks the walk. After nearly 20 years of discussing these issues, there are only a handful of industry products that almost everyone agrees are good: Fairtrade gold, Fairmined gold, and Just Gold, which uses conflict-free metal from the Democratic Republic of Congo. A lot of the other sustainability claims, such as those bandied about by lab-grown diamond sellers, are highly debatable. Some may even be false.

“When money gets in the way,” says Pomeroy, “it becomes easy to blur the lines.”

Sustainability advocates say getting the industry to care about these issues was a long process. Now comes the next phase, which may be even harder: Getting companies to prove their claims.

“Sustainability is a word that has been thrown a lot,” said Laurent Cartier, a project manager of Swiss Gemmological Institute (SSEF) during a presentation on his sustainable pearls initiative. “And sometimes I get tired of it.

“The next few years will move from making claims to being able to measure what you are saying. We need to develop more metrics so that these words have meaning.”

This is in line with the general trend toward third-party verification, as represented by everything from the Responsible Jewellery Council’s outside audits to SCS Global Services’ plan for certifying sustainably produced diamonds. (More on that soon.) Last year, the Federal Trade Commission sent warning letters to eight sellers of lab-grown diamonds and diamond simulants, reminding them that its Green Guides specifically discourage “general benefit environmental claims” such as sustainable and eco-friendly. (Some continue to make them anyway.)

One speaker at Inhorgenta, Ryan Taylor (pictured), argues the answer is his Consensas software. Taylor, a cofounder of Toronto’s Fair Trade Jewellery Co., explains his program collects data from upstream actors (meaning miners) and makes it accessible to downstream actors—meaning retailers and manufacturers. Just Gold served as its pilot project.

Taylor thinks Consensas will be especially useful for artisanal miners, who are often overlooked in responsible-sourcing initiatives, even though they are the kind of people these efforts are ostensibly designed to help. Taylor believes a small collective could use his program to gather data about its impact and then transmit that data to downstream customers. That info will still likely need to be subject to third-party auditing, and it’s possible that the data from certain operations may not be anything they would want to share. But Taylor feels that his software will at least give some of the smaller operations a chance to make their products more broadly marketable.

“If Signet wants to buy from people, and they have certain data requirements, and we can help [the miners] with that, that’s a huge win,” he says. “It’s also a huge win as far as anti-money laundering.”

It could also be a win for consumers—who are also feeling overwhelmed by the flood of sustainability claims. Now, instead of just being told that a product is sustainable, they could get precise info on that product’s eco-impact. Not all of them will want that, of course. But a company that caters to a green clientele could use it in its marketing.

More importantly, businesses who base their claims on legitimate, audited data won’t face the wrath of the FTC. The agency has indicated that it considers the first group of letters a warning, not just to the companies involved but the industry at large. Next time it may take action.

“This has to be the next step, providing evidence of claims,” says Taylor. “It’s not good enough to make statements or claims. You have to base things on data. Otherwise you are just BSing people.”

A summary of how Consensas works is here.