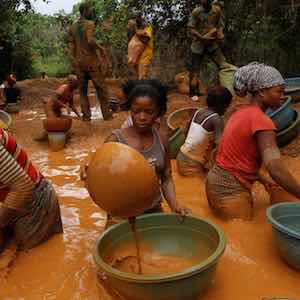 Last year, jeweler and designer Toby Pomeroy launched a $1 million challenge to find an alternative to the widespread use of mercury in artisanal gold mining.

Pomeroy admits that Mercury Free Mining—the Oregon nonprofit he heads—is still trying to raise that million bucks. Even so, it might have discovered a solution that could end the need for small-scale gold miners to use mercury, a chemical known to be dangerous and environmentally hazardous.

John Richmond, an inventor who lives near Pomeroy, had come up with a gold separation process to help his brother, a freelance gold prospector. He found out about the challenge, and reached out to Pomeroy.

“When he heard about our commitment to eliminating mercury in gold mining, he said, ‘My whole life just got a whole new purpose,’ ” says Pomeroy.

Richmond’s GoldDrop uses no chemicals and separates gold from surrounding rock using  gravimetrics. It is about to be tested for eight days in Ghana, in conjunction with the Ghana National Artisanal and Small-Scale Miners Association. Pomeroy was packing his bags for the trip when he spoke to JCK.

He admits that he still doesn’t know if the process will work in the artisanal gold fields.

“This could be a breakthrough,” he says. “We just don’t know. American miners when they have used it, said, ‘This is amazing.’ It works 100 times faster than they have been able to pan and makes it much easier to capture very fine particles of gold. When we have millions of people panning for gold, it could make a massive difference. It would mean less work for more payoff.”

That increased efficiency is key. The dangers of mercury are well-known—it pollutes the environment, including the local water supply, and it often affects miners’ health and eyesight. It’s particularly dangerous to unborn children and infants. For this reason, its use is also illegal in many countries, including the United States. But in spite of those well-known dangers, it is still widely used by artisanal gold miners because it is the best method out there, Pomeroy says.

“[GoldDrop] has to be a really clear, immediate, and profound benefit for them to adopt it,” he says. “Even if it’s safer, if it’s not faster and more efficient, they won’t use it.”

Of course, even if the pilot is a big success, there is a whole new challenge—introducing this technology to the estimated 20 million artisanal gold miners throughout the world.

Pomeroy is hopeful that a United Nations development program will help with that, though he thinks jewelry organizations might be interested too.

“More consumers are asking the questions: Where is your gold coming from? Is it mined responsibly? This could give the jewelry industry a story it very much needs.”

If this does work, will Richmond get $1 million? Pomeroy says right now it’s premature to talk about that, and he still hopes to be able to raise the money. In any case, Richmond owns the patent to the technology and may be able to make money on licensing. He might also be able to win the Artisanal Mining Grand Challenge, announced last year, which offers $750,000 to projects that solve the challenges of artisanal mining.

Pomeroy says that he’s seen other promising technologies as well, and he hopes that people will keep submitting ideas.

In the meantime, Mercury Free Mining is looking for donations to fund its work in Ghana. More information can be found here.