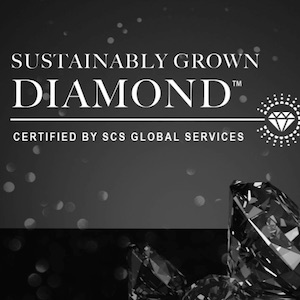 Six lab-grown diamond companies and retailers have signed up for a pilot program that will audit their environmental, social, and governance performance against preset criteria.

If they pass, their diamonds will be certified by SCS Global Services as sustainably grown, though it’s possible that label will change.

The news comes after the Federal Trade Commission (FTC) in April warned eight lab-grown diamond sellers against using general environmental benefit claims, like eco-friendly and sustainable, which are prohibited by the the agency’s Green Guides.

Interestingly, none of the lab-grown diamond sellers that were cautioned by the FTC are participating in the pilot program. In fact, most of the participating companies have shied away from making eco claims in the past.

“These are companies that want to do the right thing,” says Stanley Mathuram, vice president for SCS, which has also worked with Brilliant Earth and the Responsible Jewellery Council. “The message they are giving now is, ‘We support sustainability, and here are our practices to prove it.’ This won’t be just about how these companies compare to mined diamonds. It’s about each company’s own practices and how they measure up to a transparent standard.”

Diamond Foundry has been certified carbon-neutral by Natural Capital Partners. This new standard goes beyond that toward “climate neutrality,” Mathuram says.

It will also monitor the companies that cut the diamonds and make sure they adhere to existing labor and safety standards.

Another key component: good governance. In this era of anti-money-laundering rules that mandate buyers know their customers, retailers increasingly want information about who owns lab-grown diamond companies, Mathuram says. Yet many growers are nontransparent, and some have had been linked to fugitive economic offenders, offshore entities, or the Chinese military.

“We want the standards aligned with OECD [Organisation for Economic Co-operation and Development] anti-bribery, anti-corruption standards, so we know who owns them,” Mathuram says. “We can ask, ‘What is their history? Could there be money laundering involved? Do they pay fair wages?’ ”

A standards committee has been formed to develop criteria for certification. Among the members will be Dr. Saleem Ali, who has written about the ecological impact of both mined and lab-grown diamonds. (Both Mathuram and Ali are also involved in efforts to monitor and certify mining operations, including diamond producers, such as the Initiative for Responsible Mining Assurance.)

Mathuram hopes to have the first standards developed in about five months. He wants them to be “strict” and subject to annual revision, in the spirit of continual improvement. He admits that it’s possible that the companies will have to spend money to bring their practices up to code, especially since lab-grown diamonds use a considerable amount of energy to grow.

“They likely will,” he says. “But otherwise it will be misleading for people to just call themselves sustainable without any changes in their practices.”

The current plans call for the certification to be called “sustainably grown”—even though sustainable is one of the words the FTC objected to, since it means different things to different people. Mathuram says it will work with the FTC to make sure the wording passes muster and says it could change.

He admits that it’s also possible that competing growers will continue to call themselves “eco-friendly,” despite the FTC warning and lack of independent backup.

“They can try,” he says. “But you will have companies like Helzberg and Swarovski wanting these certifications. We have seen this in other industries we certify. No one is going to touch companies that can’t say who owns them, what their social and environmental standards are.”

One of the early participants in the program, Goldiam USA, hopes getting the certification will set it apart.

“Everyone says they have their own [growing] lab, but in a lot of cases it’s not true,” says Devang Jhaveri, chief executive officer of the company, which sells both natural and lab-grown stones. “This will show that we grow the product ourselves and have confidence in our process.”

He also hopes that it will give consumers more confidence.

A recent survey from MVI Marketing found that more than 85% of jewelry purchasers say it’s important to have independent, third-party verification of a diamond’s social and environmental impact before they purchase it.

“[When] asked how much confidence they would have if a company created its own standards for claims of social and environmental responsibility and then self-report[ed], consumers were not impressed,” said a release from MVI.

(In the spirit of transparency, we should note that MVI has done work for SCS, as well as lab-grown companies and organizations.)

“The consumer is getting more sophisticated,” says Elizabeth Chatelain, MVI president. “We are starting to see consumer pushback, asking, ‘Who is really confirming and verifying what it is you’re telling me?’ ”

Or as Mathuram puts it: “You can’t talk about sustainability if no one knows what your practices are.”