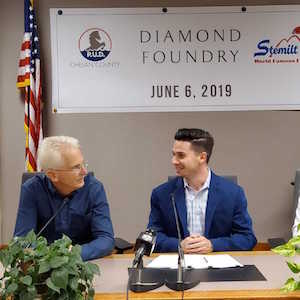 On June 6, San Francisco gem grower Diamond Foundry inked a deal with a Washington state public utility that will enable its “megacarat” production facility to operate at full capacity by March 2020.

Located in a former fruit warehouse, the facility is expected to grow as many as 1 million carats a year at full capacity. The company also plans to keep growing diamonds in San Francisco.

A PUD statement provided a rare glimpse at the amount of power that’s needed to grow diamonds in a lab. The factory will require up to 19 megawatts of power—about what’s used to power an estimated 14,250 to 19,000 American homes, according to California’s department of energy, or, by another calculation, about 11,000 homes in the Pacific Northwest.

The factory’s energy mix will be 98.46% hydropower, with less than 2% of energy from other sources, says Kimberlee Craig, PUD spokesperson.

Transitioning to mostly hydropower will help the company maintain a zero-carbon footprint, the statement said.

As far as other possible ecological impact, the company declined to estimate the factory’s anticipated water usage. “We do not have that information,” says director of public relations and communications Ye-Hui Goldenson. (UPDATE: After this story was posted, Diamond Foundry emailed that “our water is cycled through and not consumed.” It did not respond to queries seeking its exact water use.)

The PUD lacked the capacity to meet Diamond Foundry’s power needs at its location, requiring the construction of the substation. While that typically takes 18 months, this project is slated to be completed in less than a year.

The expedited schedule was agreed to because of the factory’s anticipated economic benefit to the local community: It’s expected to bring between 35 and 50 jobs to the area.

When it publicly debuted in 2015, Diamond Foundry announced it had raised $100 million from a range of investors, including actor Leonardo DiCaprio, a group of Silicon Valley billionaires, and firms such as Obvious Ventures.

“Additional capital” has accompanied Diamond Foundry’s “rapid” expansion, said CEO Martin Roscheisen in an emailed statement. He declined to get more specific. “We do not disclose financial details as we are a private company,” he said.

This story has been updated with comments from Diamond Foundry.