My 10 Favorite Jewelry Promotions Of 2021

For the last nine years, I have spotlighted my favorite jewelry promotions from the past 12 months, from companies both large and small, across the value chain.

And every year I find that, despite all the craziness in the world, this remains a resourceful and highly creative industry, which still knows how to tug at the heartstrings, kick up its heels, and think outside the box—sometimes way outside.

I have featured a lot of unusual promotions in past years, and this batch features some of the wildest yet.

I’ll wager there isn’t a big bagpipe scene in Tyler, Texas. Yet, every lunch hour, bench jeweler Matt Bowdin stands with his woodwinds outside Susan Robinson Fine Jewelry, serenading passersby. And they seem to dig it.

“It’s been fun,” he told the local news. “If I can get just a little bit of smile or a nod, it makes my day. I enjoy playing for that reason.”

Which is as good as any.

From the outside, the Gavello store in Mykonos, Greece, looks like your standard jeweler.

But inside, it was redone by Greek creative agency Saint of Athens to look like a swimming pool—and not just any swimming pool, but a swimming pool from the 1960s, complete with beach balls, lockers, pool tiles, and even a ladder. It’s hard to believe there’s a place for the jewels, but, yes, they’re there too. 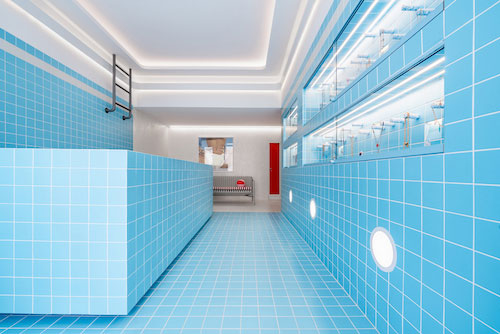 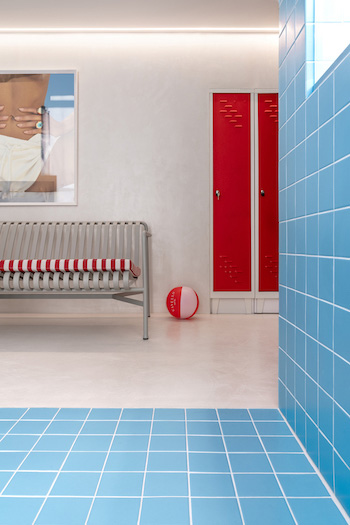 Over the years, I’ve seen several high-spirited, high-budget ads from high-end luxury brands, but this celebrity-studded spot works better than most. For one, it’s beautiful: Cartier plans to show it in theaters, where it will probably look amazing. It’s fun too.

Last month, Swarovksi worked with Annabel’s to turn the London club’s exterior into a crystal-studded gingerbread house. How does it look? Kind of delicious.

I’d also like to give a shout-out to Bailey’s Fine Jewelry in North Carolina, which created its own amazing blinged-out gingerbread house this holiday.

Jewelry rental has been around for a while. But, it seems new to rent out diamond tiaras—as in, the kind of blinged-out headpieces worn by Victorian royalty.

With so many brides having postponed their weddings, some want to go all out—which means sporting the closest they’ll ever come to a crown.

Enter Hancocks London, a 172-year-old jeweler that’s loaning out vintage headwear from the vaults (with a deposit, of course). As JCK’s Amy Elliott explains, given the tiaras will likely be worn one time only, renting makes more sense than buying one. (Plus, she notes, it’s not like they sell tiaras at your local store anyway.)

One can debate whether Day’s Jewelers becoming 100% employed owned counts as a true promotion, though it will likely give the nine-store chain a hell of a selling point. It also provided an exit strategy for owners Jeff and Kathy Corey that worked for both them and their employees, while meeting their goal of keeping Day’s around for years.

.@daysjewelers in Maine becomes #employeeowned through an #ESOP.

I tried to put into words what impressed me about this surprisingly dark commercial for an Indian jewelry chain (note: Watch with subtitles), but a YouTube commenter did it far better than I ever could:

Tiffany’s announcement on Instagram that it was replacing its signature robin’s egg-blue with a garish Crayola yellow generated 15,000 comments—with some not realizing it was a clever April Fool’s Day joke. W subsequently proclaimed Tiffany the day’s “surprise winner.”

Tiffany later tried to keep the joke going with a yellow pop-up store, but the element of surprise was gone. Still, this ingenious goof probably sparked more smiles than all those commercials with Jay-Z and Beyoncé.

When I spoke with Lafayette, La., jeweler Dianna Rae High about how she got her diamonds on an unmanned NASA spaceflight, she stressed two things: 1) it’s not easy dealing with NASA, and 2) she was determined to make it happen. Which she did.

Her bag of gems won’t take their rocket ride until next year, but the future space stones are already on sale, along with an app that lets you know when your diamonds are flying over your house.

Like many of this year’s promotions, the May “sign war” between a Gardendale, Ala., jeweler and a neighboring Chick-fil-A straddled the line between silly and brilliant.

But this wasn’t just a clever stunt, it was a well-executed one. There’s a lot to admire here: the good-natured jabs, the skillful use of social media (this might not have happened without Facebook), the idea of local businesses working together (even for an ostensible feud), plus all the work mounting stuff on each others’ lawns. 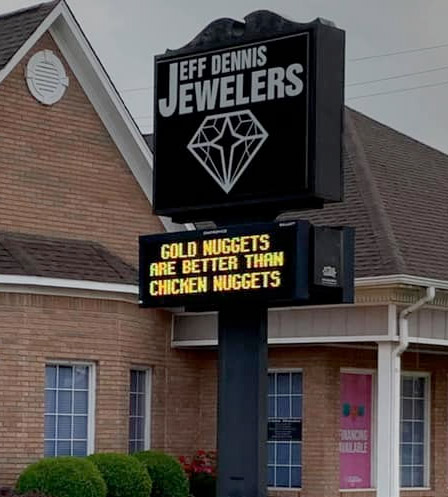 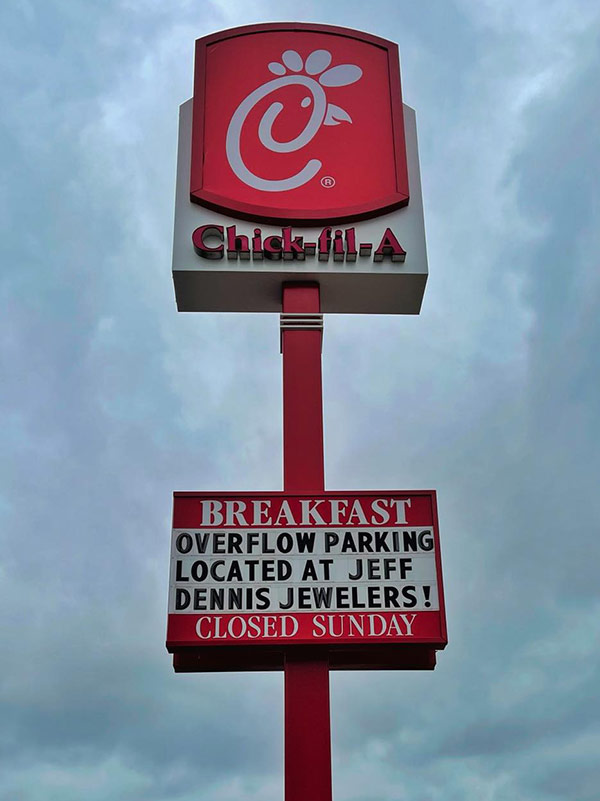 There was even a suitably ridiculous “peace ceremony,” which was broadcast live on the local news, that’s how much attention this got.

This was a war where everybody won. May that always be so.

This is my last blog post of the year. Thanks to everyone who read and commented. See you—hopefully in person—in 2022. I wish everyone a happy, safe, and healthy New Year.

Top: The daytime view of Annabel’s collaboration with Swarovski (photo courtesy of Annabel’s)