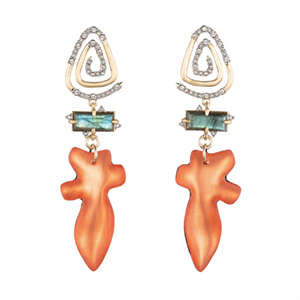 Famed suit seller Brooks Brothers filed for Chapter 11 on Wednesday in Delaware federal court, along with its jewelry subsidiary Deconic.

The company plans to put up itself up for sale during the bankruptcy process. It expects the sales process to be completed in the next few months.

A company spokesperson tells JCK:  “The Chapter 11 filing does not mean that Brooks Brothers or its subsidiary Deconic are going out of business. Deconic continues to operate as usual for the time being.”

Deconic was founded in 2017 and grew out of the company’s 2001 purchase of jewelry brand Carolee. It currently owns the Alexis Bittar and Carolee brands and earlier this year announced a licensing agreement with Rebecca Minkoff.

The company said it has received a commitment for a debtor-in-possession financing facility of $75 million from WHP Global, a leading brand-management firm, subject to court approval. It expects to keep operating throughout the bankruptcy process.

Brooks Brothers, which was originally founded in 1818, currently has 200 stores in North America and 500 worldwide, most of which were closed due to COVID-19.

While it’s in the process of reopening most of its stores, it expects to close 51 stores in the United States.

The company is currently owned by Italian businessman Claudio Del Vecchio, who serves as its chairman and chief executive officer. He said in a statement that the retailer has been exploring “strategic options” for the last year.

Its Chapter 11 petition lists $500,000–$1 billion in liabilities and the same amount in assets. Its bankruptcy papers can be seen here.

Brooks Brothers joins a long list of notable retailers that have filed for Chapter 11 in the last few months, including J.C. Penney, J. Crew, and Neiman Marcus.