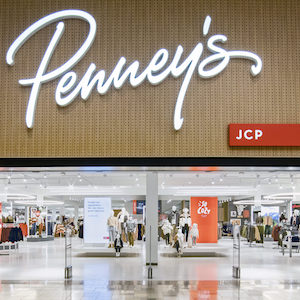 On Friday, J.C. Penney, one of America’s largest and most famous department stores, filed for Chapter 11 bankruptcy protection in Texas, with plans to reduce both its store fleet and long-term debt.

The company currently has 846 stores, all of which were closed on March 18 due to COVID-19. Right now, 41 stores have reopened, and another seven stores have curbside-only service available, according to a declaration filed with the court from Bill Wafford, its chief financial officer.

In a business plan filed with the Securities and Exchange Commission on Monday, Penney said it planned to close 242 stores—192 this year, 50 in fiscal 2021. That represents about 30% of its current total.

That will leave the chain, which once numbered over 1,000 stores, with just 604.

Prior to the filing, the company worked out a restructuring support agreement with lenders holding approximately 70% of J.C. Penney’s first lien debt. Those lenders have committed $900 million in debtor-in-possession financing, which includes $450 million of new money.

Its Chapter 11 petition listed total assets as $8.6 billon and total debts as $8 billion. It currently has approximately $500 million in cash on hand.

The filing was widely expected: Over the last month, Penney had opted not to make two interest payments on their due dates. On Friday, hours before the Chapter 11 filing, it did make one of those payouts—a $17 million interest payment—within the five-day grace period.

In a statement, chief executive officer Jill Soltau blamed the filing on the store closures, which caused its April sales to tumble a whopping 88%.

“Until this pandemic struck, we had made significant progress rebuilding our company under our Plan for Renewal strategy—and our efforts had already begun to pay off,” she said. “While we had been working in parallel on options to strengthen our balance sheet and extend our financial runway, the closure of our stores due to the pandemic necessitated a more fulsome review to include the elimination of outstanding debt.”

Still, the company clearly had problems before that, as reflected in its stock price, which has, even pre-COVID-19, often traded below the $1 mark. Its comps for fiscal 2019 (ended Feb. 1) dropped 7.7%, with fourth-quarter comps dropping 7%.

But Wafford argued the company was on the brink of a revival under Soltau, noting that 2019 had seen “sales improvement in six of eight merchandise divisions.”

Wafford’s declaration details the company’s turbulent history up to this point, including the tumultuous reign of Ron Johnson, the former Apple stores head who led the company from 2011 to 2012.

“Prior leadership made certain merchandising decisions that misread the company’s core audience, failed to attract new customers, and ultimately hurt sales,” he said. “By May 2018, the company was on its fourth CEO in seven years. The four separate management teams each came with a different business plan and execution strategy. The regular transition periods disrupted efforts to pursue any of these plans and effectuate a cohesive, long-term strategy.”

He noted that Penney has also been historically located in malls, “which have seen an even steeper decline in traffic than other brick-and-mortar locations.”

The filing has come with a bit of a controversy. In a regulatory filing on May 10, the company announced it was awarding a handful of top executives around $10 million in bonuses in advance.

Soltau will receive $4.5 million, and Wafford, chief merchant Michelle Wlazlo, and executive vice president of human resources Brynn Evanson will all get $1 million payouts. It also moved up payment of $2.4 million in other cash awards.

The company’s board decided to issue the bonuses “to retain and continue to motivate its named executive officers and other employees through the volatile and uncertain environment affecting the retail industry,” the filing said.

“That should be ‘motivation’ enough to do your job, don’t you think?” he wrote. “2019 was not exactly a stellar year for Penney so handing out rewards for ‘performance’ that year is not exactly appropriate in the first place. And then to do it as the company rapidly sinks into the retail mud is even more outrageous.”

Penney joins a growing list of prominent, if already troubled, retailers that have filed for Chapter 11 since the onset of COVID-19, including Neiman Marcus and J. Crew.

The company’s bankruptcy papers can be seen here.