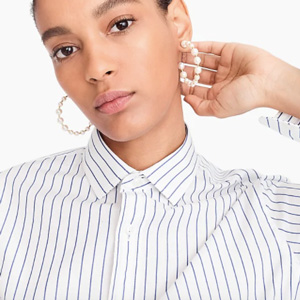 J. Crew, once a shining beacon of the potential of mass fashion—and a favorite brand of Michelle Obama’s when she was in the White House—has been struggling financially since 2015.

Roiled by shifting fashion trends (away from preppy, its signature aesthetic, and toward athleisure), changing consumer shopping habits, and increased competition from more nimble and transparent digital-first brands such as Everlane and Universal Standard, J. Crew’s inability to keep pace with the changing tides financially compromised the brand even before the pandemic shuttered shopping malls across the United States.

But the economic pressures ushered in by the pandemic, which are leaving no corners of the retail industry untouched, was seemingly the final straw for the brand. J. Crew’s parent company, Chinos Holdings, filed for bankruptcy protection Monday as part of a financial reorganization plan that will shift control of the company to its top creditors by converting $1.65 billion of its debt into equity, according to an investor statement.

The company, which operates 182 J. Crew stores, 140 Madewell stores, and 170 outlets nationwide, was in debt $1.7 billion before the pandemic, according to a March 2 SEC filing. But it has making bold moves to turn things around, including the hiring of new CEO Jan Singer, Victoria’s Secret’s former lingerie head, and planning for an IPO of its J. Crew spinoff Madewell (a beloved millennial label), in spring 2020.

The creditors that will soon be charged with leading the 37-year-old brand include Anchorage Capital Group, GSO Capital Partners, and Davidson Kempner Capital Management LP.

“This agreement with our lenders represents a critical milestone in the ongoing process to transform our business with the goal of driving long-term, sustainable growth for J. Crew and further enhancing Madewell’s growth momentum,” said CEO Singer in the investor statement. “As we look to reopen our stores as quickly and safely as possible, this comprehensive financial restructuring should enable our business and brands to thrive for years to come.” (Read more about J. Crew’s glory days here.)

J. Crew is the first major retailer to file for bankruptcy in the COVID-19 era, but it won’t likely be the last. Retailers including Macy’s and Gap have been scrambling to secure new funding and have conducted mass layoffs and furloughs in the nearly two months since the quarantines began in an attempt to retain existing capital.

The pandemic has also resulted in a rash of executive salary cuts. WWD reports that a study by executive compensation firm Semler Brossy showed that 97 companies in the Russell 3000 stock market index had made reductions to CEO salaries as of the end of last month in response to COVID-19. The average reduction was 67%. In the consumer discretionary category, 49 companies reduced their CEO salary by an average of 75%.