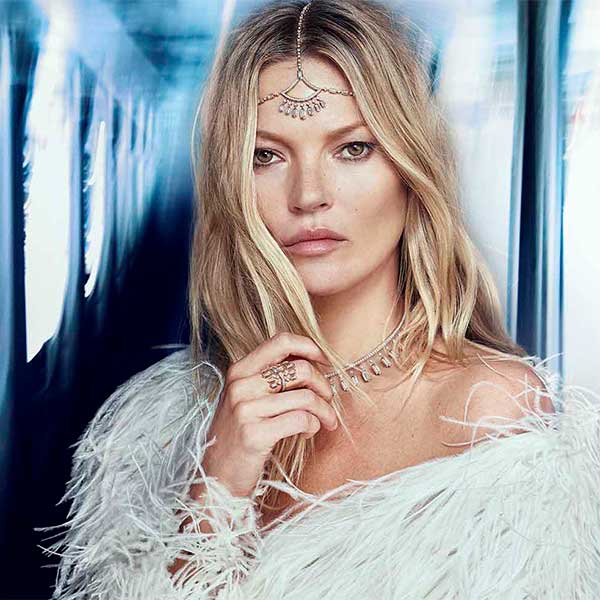 In a year full of uncertainty, dread, and heartbreak, creativity flourished. From a mine placing its emeralds in the hands of a talented designer, to a Forevermark engagement ring collection powered by the aesthetic of a celebrity stylist, to two makers pairing up to create a necklace series that seamlessly blends their strengths, the design collaboration model made its importance known in a variety of formats and brought joy in as many forms.

It was hard to narrow down the year’s best jewelry design collaborations, but altogether, we landed on 11 memorable matchups that deserve recognition for their beauty, ingenuity, and sheer novelty.

Unveiled during Paris Haute Couture Fashion Week, this small collection of seven necklaces was made in sterling silver and either white South Sea or akoya Mikimoto pearls. The designs were anything but petite or particularly ladylike. From the statement from Rei Kawakubo, Commes des Garçon’s founder: “I’ve noticed how men also look good when they wear pearls. [That was] the starting point of this collaboration. [For] a traditional company such as Mikimoto, with a 150-year-old history, [a] clashing with, and breaking of the rules can lead to something new.” Indeed, men wearing pearls was a trend we kept tracking all year long.

Developed with Alli Webb, owner of Drybar, the blow-dry salon and hair care franchise, this style-meets-comfort jewelry line from Maya Brenner is centered on studs with specially designed backs that don’t poke you when you sleep (an idea that came from Webb, who has five piercings in each ear). Nordstrom picked up the line, a first for Brenner that exposed her jewelry to an even wider audience.

Early March. News of the Jennifer Fisher x CB2 collaboration, with its subtle nods to the designer’s famous hoop earrings, chunky elongated link chains, and tubular bracelets/rings, came right before the pandemic completely took over the airwaves and nothing, not even jewelry, could be written about without acknowledging its impact. I called the collaboration “an accessible reimagining of urban living in its most glamorous (yet relatively affordable) form,” and it was. But boy is that a sentence that pre-dates the concept of sheltering in place.

In honor of the museum’s 150th anniversary, the Met unveiled a series of design collaborations. New York jeweler Catbird was among the participating brands, and it created a capsule of four pieces inspired by the works of female artists as well as a reimagining of the Met’s iconic (and now defunct) metal admission token.

This 44-piece collection featuring works by an international corps of top-tier jewelry designers was more than a showcase for Gemfields’ Zambian emeralds and Mozambican rubies. It was also a partnership with the international conservation charity Space for Giants to form a joint initiative called Walk for Giants—effectively a fundraising and awareness-building campaign for African wildlife conservation, with a particular focus on protecting the continent’s beloved elephants and their natural habitat.

Shinola x I Am a Voter

As JCK’s Emili Vesilind reported in September, the Detroit-based watch and accessories brand paired up with the nonpartisan organization I Am a Voter on an awareness (and product) campaign that registered people to vote in Shinola stores, through QR codes and detailed text instructions posted at every cash wrap. The centerpiece of the campaign was the new I Voted Detrola watch (pictured above), which was released on Sept. 22, National Voter Registration Day.

For the fourth time since 2018, Muzo Emerald, the mining company based in Colombia’s legendary Muzo district, debuted a capsule with top designers. The 2020 edition is a 34-piece collection encompassing the work of Colette, Harwell Godfrey, Jenna Blake, Katherine Jetter, Loren Nicole, Nina Runsdorf, Michelle Fantaci, Robinson Pelham, Silvia Furmanovich, and Sorellina. As JCK editor-in-chief Victoria Gomelsky notes here, the collection’s pieces were “conceived and created in the eye of the COVID storm.” It was also the first time Muzo furnished partner designers with faceted material.

A petite collection of one-of-a-kind diamond pendants by U.S. designers Jade Trau, Jennie Kwon, Julez Bryant, Sara Weinstock, and Zoë Chicco was the first in an ongoing series of partnerships from De Beers Group that will attempt to “reset” perceptions of the natural diamond industry. The pendants were auctioned by Sotheby’s in an online sale, with final hammer prices split equally between two charities: Stepping Stones International in Botswana and the NAACP Legal Defense and Educational Fund in the United States.

“It was a passionate idea of combining precious metal and precious music,” New York–based designer Donna Distefano told JCK’s Emili Vesilind when the collection launched in November. Celebrating the band’s 50th anniversary, the line incorporates a bevy of Aerosmith imagery, lyrics, and song and album names.

Top: Just in the (St.) Nick of time to make our list: December’s completely gorgeous Messika x Kate Moss collaboration, which is veined with the idea of a free spirit and features bold statement jewels, fluid lines, neo–art deco references, and swingy tassels expressed in the finest diamonds, colored gemstones, and gold. Here, Moss wears tributes to the baguette-cut diamond: adorning a headpiece, dangling on a choker, and swinging freely as charms on a ring. (Photo: Chris Colls, courtesy of Messika Paris)