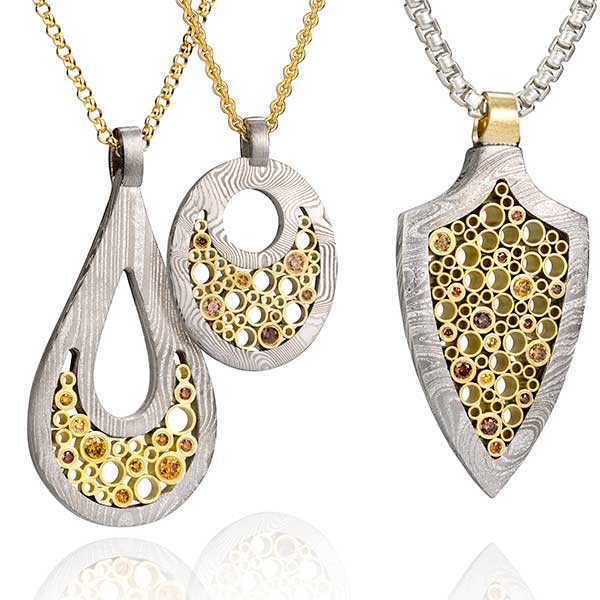 Neither Belle Brooke Barer, of Belle Brooke Designs, nor Chris Ploof remembers where they first met, but both agree it was 10 or so years ago, in Las Vegas or possibly at the Tucson Gem Show, and that there’s a good chance they were introduced to each other by Manos Phoundoulakis, formerly of Omi Gems.

The idea to collaborate on a jewelry collection, one that paired Barer’s goldwork with Ploof’s men’s jewelry sensibility expressed in Damascus steel, meteorite, and mokume gane, was Ploof’s.

Drawn to Barer’s field of circles—the openwork circle matrix that has become the designer’s signature—Ploof saw one of her Instagram posts and “it just hit me one day, that the frames around the circles could look really cool in Damascus,” he remembers. “And happily Brooke was in. I think we talked for, like, 10 minutes and it just happened.”

Adds Barer, “My circle matrix was able to fit into his designs using the Damascus [steel] he manufactures with total fluidity. His shop is so well-outfitted that he is able to produce the shaped frames of each design in the dimensions I wanted to use with ease and expediency. So the possibilities were really endless.”

After interviewing both designers, I am pleased to share this in-depth look at how the collaboration came together.

Barer immediately recognized that her and Ploof’s aesthetics were simpatico, and that both attract customers looking for jewelry that’s not “overtly feminine and traditional” yet artisan-crafted. “I think that’s a niche we both occupy,” she says.

Ploof describes the collaboration as an organic evolution between two complementary points of view. “All I really thought is how great it would be to have some of Brooke’s best sellers realized with the beauty of Damascus surrounding them,” he says. “We went back and forth a bit, and it really unfolded so easily.”

Together they set out to create a collection of pendants that leaned toward crisp and clean and ultimately were very unisex in style. “I have been really wanting to do more men’s jewelry for a while, and since Chris has such an outstanding men’s line, this was really eye-opening for me to be working in that vein,” says Barer. “There are some pieces that are slightly more feminine, but really most of them are appealing to everyone.”

With their aesthetics aligned, and the pendant concepts established, the designers moved forward on creating the pieces. But the logistics would have been tricky even under normal circumstances, as Barer is based in New Mexico and Ploof is in Massachusetts. Each piece was a true collaboration, then, in that both designers contributed equally to its execution.

“Logistically, we were able to create a good flow and just ship things back and forth,” says Barer. Their design process began with Barer creating a drawing, which Ploof would convert to a CAD file. Next, Ploof would water jet cut the steel he fabricates in his shop and send Barer the frames. Barer would then solder, sand, and finish the frames, set the stones, and send the nearly finished jewel back to Ploof. The final step took place in Ploof’s studio: adding a bail and the designer’s signature etching technique, and attaching the chain.

“This was a great time for this type of [collaborative] work,” says Barer. Because of the COVID-19–related shutdowns that occurred throughout the spring and summer, “I think neither of us were quite as busy as we normally would have been,” she says, “so it really allowed for the extra space to dedicate to the process. I wasn’t juggling as many different projects as usual. Also, because of COVID, my employee has been on furlough, so the solo time in the studio really allowed me to get into the flow with the work.”

Barer and Ploof decided to launch their collection with Worthmore Jewelers in the Atlanta area; owners Geri and Harris Botnick have been collecting and selling their respective lines for years.

“We have both done trunk shows at their locations in person and we know the same customers, which is really funny,” says Barer. “Many of their customers own pieces from both of our collections, so we thought this [new collaboration line] would be well received.”

Ploof agrees: “Geri and Harris have created an amazing culture around their two stores in Atlanta and Decatur [Georgia], and have helped create an Atlanta collector culture for what I do. I also wanted Worthmore because I know when they say they love a collaboration they will also happily promote it, and the more special it is, the better. So starting the launch there seemed right.”

Both Barer and Ploof hint that the collaboration was so successful—especially in terms of the seamless way they worked together—that they’re thinking of expanding it, to touch on other categories.

“We have just really begun with the pendants,” says Barer. “Most of these designs easily lend themselves to earrings and cufflinks, so I think those are the obvious next steps. I feel like my design language for mens’ pieces is going to really benefit from this work.

“And it has been such a pleasure to work together. I really do feel honored that Chris respects me as a goldsmith and a designer, because I feel like he does incredible work. Post-COVID, I plan to visit his workshop and watch the Damascus and mokume gane fabrication process. I think all the tools and technology he uses are fascinating, and I’d love to see the process and the machines. Plus, it would be great to see each other after this project.”

As for Ploof, “The knowledge I walked away with I already knew—it’s just been reinforced,” he says. “And that is: Brooke is a great designer and a killer technician who was fearless about the Damascus. I’ve worked on many collaborations—this one has been exceptional and I hope we can keep it going. I’m betting we will continue to have fun and make some more great pieces together. I know I can’t wait!”