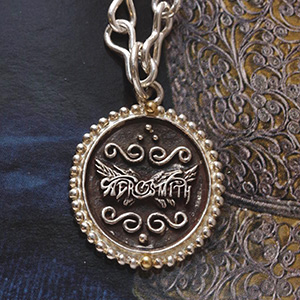 New York City–based fine jewelry designer Donna Distefano has been creating original pieces for members of iconic rock band Aerosmith for years. In 2019, she even made a jewelry replica of guitarist Joe Perry’s signature Blade Runner guitar—a toast to her famous client—as part of her Rock Ready collection.

Now, in collaboration with the legendary rock band, she’s debuted a collection of fine jewels that celebrates the band’s 50th anniversary.

The Aerosmith x Distefano collection incorporates a bevy of Aerosmith signatures: imagery, lyrics, and song and album names. Some standouts include angel wing earrings engraved with the name of the band’s second album, Get Your Wings; the Sin City poison ring, which features the band’s intricate logo in relief on a placard hiding a secret compartment; and the Dream On necklace, which boasts double oval-shape pendants that say “Dream” and “Until Your Dreams Come True”—an homage to the beloved Aerosmith ballad “Dream On.”

“So much of what goes into these pieces is inspired by their lyrics, chords, and the overall beauty of each song,” Distefano notes. “[The band is] an identity for generations of fans, artists, and musicians. I aim to channel all their talents into my work.”

Distefano, a former senior goldsmith for the Metropolitan Museum of Art, says her relationship with the band began years ago when Perry contacted her to collaborate on custom pieces for his wife, Billie Montgomery.

“Joe called and all I had to do was answer the phone!” she says. “At first I thought someone was messing with me, but the more he spoke I heard that Bostonian accent. One of the first things he said was, ‘My wife Billie and I love high-karat gold.’ He was looking at a photo of my Decorative Sphere necklace, which ended up being the inspiration for him to reach out. Joe is a shy guy who is sincere and knows what he wants.”

When Distefano made special custom pieces for the couple, she would send photos and videos of the process to Perry, “and he’d go bananas—more so than any of my friends or other clients,” she remembers. “He was always so stoked about technique, depth of color, and my jewelers’ tools.” She adds, “It shouldn’t come as any surprise because Joe is all artist, 100% genuine. He fueled me with ideas and praise, and I, in turn, kept fueling him with results.”

Years later, she met Montgomery in person, and the seeds of the collection were planted. Now, “after years of talking about it, we finally did it,” says Distefano, who with her husband joined Perry and Montgomery at a musical performance in Lucca, Italy. She notes that the meetup reinforced that the four of them “felt very strongly” about developing a commemorative collection that’s also cool and unassailably gorgeous.

Says Distefano, “It was a passionate idea of combining precious metal and precious music.”

The collection, which starts at $95, is available at Aerosmith.com and for view on DonnaDistefano.com (shoppers can also direct-message Distefano’s studio on Instagram to buy).