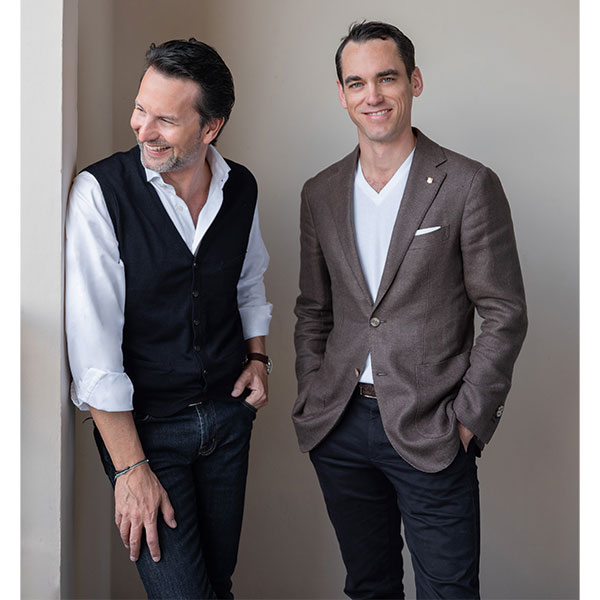 Design collaborations are a smart way to generate buzz, reach new audiences, and ultimately drive sales. Here’s what makes the model successful—and how jewelers can make it work for them on a local level.

Although 2020 has been tough going, the year began with some memorable jewelry design collaborations that epitomized why alliances between like-minded brands are so popular—and powerful. There was the Lark & Berry x Diamond Foundry suite from the Academy Awards in February, followed by Jennifer Fisher x CB2 in March. And more recently, to the delight of watch collectors worldwide, Swiss manufactures MB&F and H. Moser & Cie mingled their DNA to cocreate two extremely rare limited-edition timepieces in June. These are just a few examples, and there are plenty more to come this fall.

The design collaboration model may have begun at Tiffany & Co., when former design director John Loring initiated a collection with Paloma Picasso in 1980 (and Frank Gehry in 2006). Many present-day matchups likewise involve a jeweler partnering with an artist, fashion designer, or influencer, from Mikimoto x Comme des Garçons to Annoushka x Austy Lee.

We can also thank Target (x Isaac Mizrahi) and H&M (x Karl Lagerfeld) for firmly planting the concept into our cultural consciousness in 2003 and 2004, respectively. Around 2010, J. Crew also got in the game, developing collaboration product lines with costume jewelry designer Lulu Frost, not to ­mention a slew of non-jewelry brands. But the runaway success of those collaborations was about the novelty of ­mixing high and low—that formula doesn’t really translate well to the world of fine jewelry (though Temple St. Clair did go on a “Target run” in 2010).

What does work: thoughtfully blended, creative undertakings that result in something rare, often one-of-a-kind, and irresistibly novel—without compromising the integrity of the end product. This could be a gemstone mine placing its product in the hands of talented designers; a heritage jewelry brand joining forces with a younger, fresher voice (see Georg Jensen x Sophie Bille Brahe or Swarovski x Paige Novick); or a cross-genre experiment (like when the Detroit-based lifestyle brand Shinola ­produced a timepiece with Radio Flyer, or when the fine jeweler Yi Collection did a line with SoulCycle).

“We have always embraced opportunities to collaborate,” says veteran British jewelry designer Stephen Webster, who has partnered with brands as varied as Dom Pérignon and Grey Goose as well as the artist Tracey Emin. “Results of our collaborative projects have not only been very successful, but have also pushed us in a direction that we probably would not have explored under our own single direction.”

Another pioneer in this world has to be Sally Morrison, who, during her tenures at the Diamond Information Center, the World Gold Council, and the ruby and emerald miner Gemfields, made designer collaborations a hallmark of her ­career. (Morrison is currently public relations director for natural diamonds at De Beers Group.)

“I’m interested in putting valuable and fabulous materials in the hands of very creative people,” Morrison said last year when she was a guest on JCK’s podcast, The Jewelry District. “There are some people that are very creative but could never afford to create these kinds of things commercially, and if you can get those pieces in a very visible place like the red carpet, it pushes your material into a cultural conversation in a much bigger way.”

A red-carpet appearance remains a kind of holy grail for mines and producers: Gemfields enjoyed an iconic moment at the 2017 Oscars when actress Ruth Negga wore a tiara featuring 146 cts. of Gemfields rubies made by designer Irene Neuwirth in collaboration with Negga’s stylist, Karla Welch.

But does command of the spotlight translate to sales?

Turns out, commercial success isn’t always the goal. As Gabriella Harvey, head of business development for Muzo Emerald Colombia, explains, “The ROI [return on investment] for the designer is an opportunity to create a collection using Muzo emeralds that tells a story of traceability, which is becoming more important for jewelry purchases. Muzo benefits when the finished piece is sold; however, our main objective is more about creating awareness and educating the industry and end consumers.”

“The key to a successful collaboration is when it adds ­relevancy and newness while broadening your brand’s appeal to a new audience,” says Hearts On Fire president Caryl Capeci. “This is why Hearts On Fire by Hayley Paige had a great ROI for the brand and for our retail partners. It took our very popular category of diamond bands and told a different story from a different perspective. Since launch, the diamond bands from the HOF x HP collection have sold through at retail two times faster than the HOF diamond band category.”

Los Angeles–based designer Maya Brenner has pursued collaborations with a diverse group of brands, from the stationery company Paperchase to the athleisure line Beyond Yoga. In February, Brenner debuted a style-meets-comfort jewelry line she developed with Alli Webb, owner of Drybar, the blow-dry salon and hair care franchise. It’s centered on studs with specially designed backs that don’t poke you when you sleep (an idea that came from Webb, who has five piercings in each ear).

“She loves jewelry, which makes her a perfect partner, and she’s such an entrepreneur and a great promoter and knows the market,” says Brenner, who became friends with Webb when they met at a wedding in Mexico City.

Maya Brenner x Alli Webb recently landed at Nordstrom, thanks to Webb’s connection to the department store, which ­carries her Drybar line. It was a retail channel that Brenner didn’t have access to previously, and the exposure to such a large base of new customers is invaluable; the monetary benefits are even more so.

Because attracting as many customers as possible is more ­important now than ever before, Main Street jewelers might consider applying the principles of these high-profile design collaborations to their local milieu. Could you partner with a spa, salon, or yoga studio on a capsule line? At holiday time, your top ­designer could create renderings or full-color CAD drawings that get transferred onto chocolates or other sweets made by a local confectionery (see Kimberly McDonald x Sugarfina for ideas). Maybe there’s a local blogger who seems simpatico with your brand, and you develop a limited-edition line together, with a launch event—and eye-catching campaign—to promote it.

As the saying goes, we’re all in this together, and collaborating with another local business to give all of your customers something novel, beautiful, and hyperlocal to delight in might be the perfect place to start.