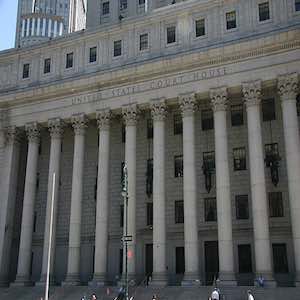 A New York federal court has declined to dismiss two patent suits brought by the Carnegie Institution of Washington and WD Lab Grown Diamonds against three of WD’s competitors.

Carnegie and WD first sued Fenix Diamonds and codefendants Pure Grown Diamonds and IIa Technologies in January, claiming they were infringing on Carnegie’s diamond growing and heating patents, which have been licensed by WD. All three defendants filed motions to dismiss two months later.

On Friday, Judge Jed Rakoff said he was letting the case proceed in a 29-page ruling that quoted the song “Diamonds Are a Girl’s Best Friend“ and included a footnote adding “aficionados of James Bond movies would want to add boys are also often enamored of diamonds. See Diamonds Are Forever (1971).”

In his opinion, Rakoff asserted that the first Carnegie patent (U.S. 6,858,078) purportedly improves on prior methods of producing diamonds with the chemical vapor deposition (CVD) method by “controlling the temperature gradients across the growth surface.”

Pure Grown and IIa had argued that diamond-growing was unpatentable, since growing diamonds simply replicates what nature does.

But Rakoff found that “while both methods necessarily rely on principles of chemistry and physics, so, at some level, do most inventions.”

Pure Grown also argued that improving CVD diamonds through HPHT annealing was unpatentable, since it was long known that HPHT improves the quality of natural diamonds, and both natural and synthetic diamonds have the same chemical makeup.

However Rakoff said that Pure Grown “cannot seriously argue that plaintiffs are attempting to patent the diamond growth process that occurs in the earth’s crust.” He asserted that the company is really arguing that Carnegie’s patents represent an “insufficient advance” against prior methods, which is an issue that needs to be addressed in litigation.

Fenix, Pure Grown, and IIa all argued that there was “insufficient evidence” that the companies were infringing on Carnegie’s patents, since their growing methods are not public. But Rakoff found that WD’s allegations were “at least plausible” enough to survive a motion to dismiss.

Fenix and Pure Grown did score some points with the judge, as he accepted several of their interpretations of Carnegie’s patents.

On Monday, Pure Grown and IIa filed a response to WD’s complaint, along with a counterclaim that sought to have Carnegie’s patents declared invalid, due to purported issues with their authorship.

In addition to generally denying infringement, Pure Grown’s response noted that it does not manufacture diamonds. It also argued that while IIa “manufactures, markets, offers for sale, and sells Type IIa diamonds outside of the United States as gems,” it does not sell them to Pure Grown.

Fenix has not filed a response to the suit. But a source close to the company said, “Fenix didn’t expect the case to be dismissed. That is not uncommon. But they feel positive that the court’s opinion of the claim construction is very different than what the plaintiff has proposed. They will let the case run its course.”

Neither IIa nor its lawyers returned a request for comment.

Carnegie and WD had also filed a patent suit against ALTR and R.A. Riam, but that case was dropped in March.

In February, a Singapore court found that IIa had infringed on a patent held by De Beers’ industrial diamond division, Element Six. The court also invalidated one of the Element Six patents.