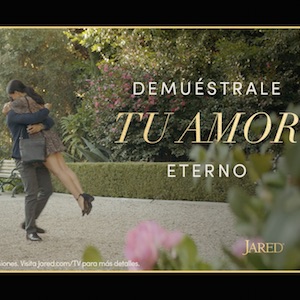 Last week, on a restaurant TV, I saw a Zales commercial. This isn’t all that unusual—except for when I saw it. It was a few days after Valentine’s Day.

It’s all part of a new strategy from America’s largest jewelry retailer. For years, Signet Jewelers’ ad campaigns followed a familiar pattern: It would blanket the TV airwaves at holiday time, repeating  “Every Kiss Begins with Kay” and “He Went to Jared” so many times they were drilled into the public consciousness. Not everyone loved it, but it seemed to work, as millions of consumers who were battered into submission can attest.

Last year, however, for the first time, Signet spent more on digital than on television. It now aims to be “always on,” and its ad budget will be less heavily slanted to the fourth quarter.

“We have significantly broadened our media strategy,” says chief marketing officer Bill Brace (pictured below), who joined the company in September 2018. “We’re connecting with people 365 days a year. People have birthdays and anniversaries every day of the year.”

Chief executive officer Gina Drosos has changed many things during her two-and-a-half-year tenure, but the change in advertising may be the most noticeable. Its three main banners—Kay, Jared, and Zales—all have new creative agencies. (For decades, one agency handled both Kay and Jared.)

The new ads target younger viewers with flashy visuals and thumping soundtracks and less of the tinkly piano that has traditionally adorned Signet ads.

But Signet also hopes to make each banner’s ads more distinctive—and have each deliver a different message.

For instance, flagship chain Kay is still targeting the “sentimentalist” who wants to give a meaningful gift. While its ads still target viewers’ heartstrings, it is now trying to tone down the goop and make its ads feel more updated and modern.

“That will absolutely be a fine line to walk,” admits Brace. “How do we push the brand forward and make the heritage of Kay relevant today?”

It’s keeping “Every Kiss Begins With Kay,” but sometimes varying it. Last holiday, one tagline read “Every Your Love Keeps Me Centered Begins with Kay.”

“That is very intentional,” says Brace. “We have a lot of heritage and brand equity built up in that tagline. But the idea is to broaden it.”’

The Zales advertising takes advantage of that brand’s fashion positioning.

“It is really targeting female self purchasers who are interested in making a big statement,” says Brace. “In particular, our campaign, ‘I am a Diamond,’ is very bold, very fashionable.” (Some lyrics to the background song: “I do what I want, when I want it. / I buy my own rock and I flaunt it.”)

Jared targets a male customer and has a slightly higher price points than the other banners.

The message for those customers is “giving jewelry takes a lot of thought,” says Brace. “It’s a big investment. It’s a gift that is really saying something. It is a bit of a vulnerable act.”

The company has recruited an a capella group, which it calls the Jeweltones, to appear in its ads and croon musical pep talks.

“They are actually a real group that we were lucky enough to find,” says Brace. “It’s a great way to make the brand a little bit more distinctive.”

And finally, Signet is running is first ad campaign for Piercing Pagoda, which has been among its best-performing divisions. This campaign will be all digital and features the theme “Be More You.”

E-tailer James Allen also does its own distinctive and quite offbeat advertising, which it develops in-house.

“It’s very different than the rest of the banners,” says Brace. “The execution is really tailored to millennial consumers. We see it performing really strong with that age range and not as well among older consumers.” (We found that, too.)

The larger goal is to make Signet’s advertising more “modern” and “inclusive,” Brace says.  A 2018 Jared ad featured a woman proposing to a man.

The ad “was a very deliberate effort to depict love and relationships in a modern and inclusive way. Our commitment is to be inclusive as a company.”

In short, Signet’s marketing is becoming more diverse, more distinctive, more digital, with ads running more days of the year. Which is, for Signet, very different.