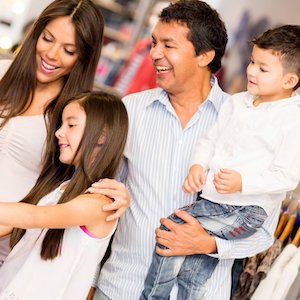 “I salute you,” Cramer responded. “Many companies don’t get what America looks like right now.”

And yes, America is starting to look very different.

In 2018, the U.S. Hispanic population hit a record high of 59.9 million, a 10 million–person jump from the previous decade, according to U.S. census data. The numbers are particularly high among young people: More than one-fourth of the U.S. population under 25 is Hispanic.

And yet perhaps the most remarkable thing about Signet’s new venture is how belated it is. Other big retailers have long played in this space. Home Depot has done Spanish-language marketing for at least 12 years. Walmart and Target have for at least the last five. The number one advertiser on Hispanic media is Procter & Gamble, the quintessential American mainstream marketer and, perhaps not coincidentally, Drosos’ alma mater.

With few exceptions, the jewelry business has long neglected the Hispanic market, which is a shame, because it represents a huge opportunity.

– Some 79.3% of Hispanic consumers will purchase at least one fine jewelry or watch product in the next 12 months, with a median retail price point of $250.

– Hispanic consumers are strong jewelry self-purchasers: 48.4% of respondents said they have purchased fine jewelry for themselves.

– There is little awareness among Hispanic consumers of the 4Cs of diamonds and laboratory grading.  Only one major gem lab offered reports in Spanish.

Of course, some jewelers have been been paying attention. Daniel’s Jewelers, a California chain whose clientele is 60% Hispanic, has grown from 73 stores in 2014 to 105 today. (That’s more stores than Tiffany & Co. has in the U.S.)  Don Roberto Jewelers numbers 80 stores.

The jewelry business has been starved for growth and has often felt neglected by fickle millennials. It needs to grab any opportunities that are out there.

This new initiative, while perhaps a little tarde, shows that Signet knows that the country is changing and is willing to change with it.

(Image courtesy of the Bureau of Labor Statistics)