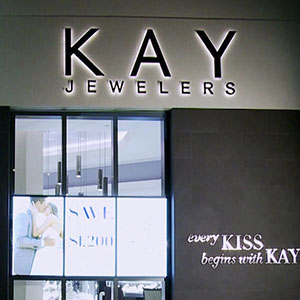 Signet-owned Zales and Kay have chosen new ad agencies, about six months after sister nameplate Jared did the same.

After 34 years with Stern Advertising, Kay Jewelers’ creative has moved to Zimmerman Advertising, a Fort Lauderdale, Fla.–based agency that specializes in retail.

The Zales account will now be handled by New York City–based Badger & Winters, an agency known for “female empowerment messaging.” Cofounder Jim Winters said in a statement that its work with Zales will “change how the jewelry category engages women.” Prior to this, Zales’ ad agency since 2010 was Austin, Texas–based GSD&M.

Signet has also selected MediaCom as its media planner and buyer for all four U.S. banners: Kay, Jared, Zales, and Piercing Pagoda.

For decades, Signet’s U.S. division, Sterling, used Cleveland-based Stern Advertising as the agency for its flagship nameplates, Jared and Kay. The agency is credited with penning the “Every Kiss Begins with Kay” and “He Went to Jared” slogans, which certainly lodged themselves in the brains of many Americans—although not always their affections. Still, it’s hard to imagine the chains achieving their current prominence without them, and the partnership between the two Ohio companies proved astonishingly durable: Stern first started working with Kay in 1985, when it was a “small regional chain,” the agency says.

As with Jared, the moves could mean very different brand messaging than Signet has done in the past and perhaps a wider variety of approaches. Following Signet’s 2014 acquisition of Zales, the three nameplates occasionally ran the same commercials, for the Ever Us and Interwoven brands. Shortly after taking over, CEO Gina Drosos said that she wanted to better differentiate the three stores. Last year, she instituted a new internal structure that let the banners operate more independently than in the past.

In August, Jared chose a new ad agency, Durham, N.C.–based McKinney. One of that agency’s first steps was to drop “He Went to Jared” and introduce a new slogan, “Dare to Be Devoted.”

Now that Kay is also switching agencies, one has to wonder if “Every Kiss” will also feel the kiss of death.

Signet spokesperson David Bouffard says “Every Kiss” is “iconic” for Kay, and its melody can still be heard in its commercials. A Zimmerman spokesperson did not respond to a request for comment.