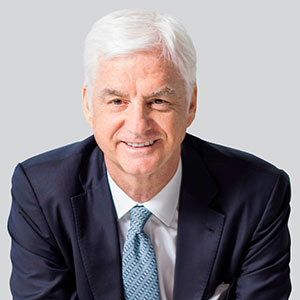 Here, he talks about how the bridal jewelry market is changing, why De Beers is hosting Botswana’s first couple, and Lightbox’s real purpose—and its future.

JCK: At this morning’s breakfast, you introduced a new line of Forevermark bridal jewelry, which, in something of a shift, Forevermark will manufacture itself. What made you take that step?

Stephen Lussier: It recognizes that the bridal market is changing, and the bridal consumer is changing. The way in which you need consumers to think about the significance of the diamond is different. Historically, people thought about a diamond at the beginning of your commitment relationship. Now, you are generally not. There’s a lot of other steps along the way that already show commitment—whether it’s buying a pet, or living together, or you have the house. As a result of that, the diamond can seem less important. What our research shows us is that, actually, when people have been married for five years, the diamond is more important, but that’s over time, and it’s not in their minds in the beginning. So you need to work hard in the way you make them understand this is something that is going to be important to them. And that’s a different communication task.

Why we’re doing the collection is, consumers are increasingly engaged in the sector through the lens of brands, because the way they get their information now is through digital media, and digital media is a very brand-driven environment. And they expect to engage with us on the whole piece, not just the diamond. We still sell loose diamonds for engagement, we have manufacturers and jewelers creating their own pieces. But to compete effectively in an omnichannel environment, you need to control that interaction with the consumer.

How is that reflected in the advertising?

The campaign is designed to get people to understand that a diamond is going to play a role in their whole life. If you look at historic diamond advertising, it’s all focused on that extraordinary moment where a man asks a woman to marry him. The reality is, for most people, that moment isn’t what it was, and what you need to make people understand is the role the diamond will play in their life. In the new advertising, we show not only engaged couples, but people who have been married for 50 years, and how the diamond is still part of their life. That changes the way people think about it, and it raises the priority of the diamond in their list of expenditures.

People, particularly the millennials, are under financial stress. In some cases, they already have children. To get them to prioritize the importance of it, you need to get them to think about it as a lifelong joy creator for them.

How are sales of Lightbox? Are the plans still the same?

We are pleased with how it’s going. We are selling mostly the blues and the pinks, which is by design. We have constraints on production capacity until our new plant is up and running in Oregon next year. As soon as that is up and running, then we have the capacity to move beyond our e-commerce platform, which I know jewelers are interested in. But we want to have sufficient capacity to meet that demand.

Would Lightbox ever do a private label for lab-growns?

At this point, we are still focused on the brand, because we are selling all the production we have, so until we have our new facility there is not much option. Our focus is expanding the designs and variety and making sure we work out what are the winners. We want to keep working on getting the costs down, because the lower the price, the bigger the market opportunity is. That is where we think differently than the other [lab-grown companies], who are looking at how they can make short-term money at something that is, in our view, not sustainable. Which is fine, they want to pay their investors back. For De Beers Group, we will have to be here for a long time, we are focused on where we think the longer-term sustainable market is for lab-grown, which will be in the lower-value pieces, where the diamond doesn’t have an inherent value, and you are buying it because it looks pretty. There’s nothing wrong with that. There’s a huge market for things that look pretty and don’t cost too much.

Doesn’t that cannibalize the lower end of the market?

Not significantly. We are selling in a category where it’s competing largely with non-diamond jewelry. If you look at the jewelry market below $500, the diamond share is in low single digits. If you go above $1,000, you have a higher diamond jewelry share. To the degree that we can get lab-grown competing below $500, you are actually in a different market segment from a diamond perspective, and there is minimal cannibalization.

It will affect some of the semiprecious, the low-end colored stones. But at the end of the market it’s mostly color.

Is the goal of Lightbox to lower the price of lab-growns?

No, I would say the strategic aim is to position the category of product in a sustainable, value-adding way, which is different than a natural diamond’s value proposition. It doesn’t make it a bad proposition, but it’s different.

As a result of that, prices had to come down. And they have come down. It’s just the laws of economics. As Chinese production [of lab-grown diamonds] builds, and you have a technology curve that drops the price, every time you double production, the prices will come down, and they are already dropping pretty rapidly, as we saw at the Hong Kong show.

This should be a cost-plus business, not a rarity business. The price declines are not an end in themselves, but they are what the price should be if you are going to be honest and fair to consumers.

In a recent Gizmodo article on lab-grown diamonds, it says that 45 percent of Lightbox’s production will come from renewable sources. Does that mean that Lightbox is a “green” product?

Not really. We are on the grid. It will mean Lightbox will be at the bottom end of the range of emissions. And to be honest, whether you look at a natural diamond or a synthetic diamond, they are not a contributor to the world of greenhouse gasses. The energy used to mine an average natural diamond that is required for 1 carat of polished is equivalent to [what is used to create] three iPhones. Having bought iPhones, I know that’s about nine years of my life. The diamond, I am going to have for 50 years. It’s a kind of odd discussion to have. You are arguing about things that are not particularly important in the world.

Lightbox will have hydropower, which is inexpensive. You can’t really use renewables for synthetic production. You need extraordinarily consistent energy over a long period of time to synthesize a diamond. Runs will go two weeks, three weeks, and if there is any variation during that time you lose the runs. The problem with renewables, they are not continual. You use wind, when the wind stops, they lose the power, then you need huge batteries. I don’t think any [lab-grown diamond producer] will use a renewable base. And probably, natural diamond mining will get there first. We are aiming at De Beers that the next mine that is created, hopefully in Canada, will be able to do that in a carbon-neutral way.

Trucost did a pretty good job [in its DPA study] in what is a hard area, because they had to create models where there isn’t much data. Based on the Lightbox experience, we can see we are at the bottom end of that range. If you are using coal-fired plants from China, you will be at the top of that range.

This week, De Beers is hosting the president of Botswana, Mokgweetsi Masisi, and his wife, at the same time De Beers is engaged in contract negotiations with Botswana. What is the purpose of their visit?

The purpose for them coming is for us to bring to life the story of the good that diamonds do. In a world where we have lab-grown, it’s important for people in America to hear it from the horse’s mouth. When we opened a boutique in the airport in Botswana the first lady told the story of how diamonds impacted her. It was so powerful that I thought, it’s one thing for me to hear in Botswana, we need to get that story out.