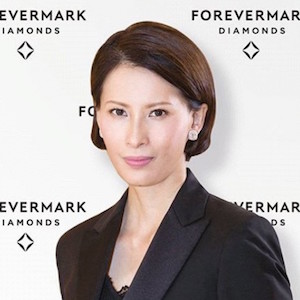 She takes over from Stephen Lussier, the De Beers veteran who has been the brand’s CEO since 2009.

Lussier, who is also the De Beers Group executive vice president for consumer and brands, will serve as the brand’s chairman and continue to oversee its strategic direction, but he will step away from running its day-to-day operations.

Lussier plans to increase his focus on shaping the De Beers Group’s strategy at the consumer level.

Liu first joined Forevermark in 2008 as the president of its Asia-Pacific region. A member of the De Beers Group executive committee, she previously worked for L’Oréal, Louis Vuitton, and the Boston Consulting Group.

“As the brand sees rapid growth in Asia, Nancy’s exceptional expertise and knowledge of the region provide us with excellent continuity,” said Lussier in a statement.

Regarding his new role, Lussier said, “This is a moment of great opportunity for diamonds. As symbols of nature, uniqueness, and positive social impact, they have huge potential to inspire consumers of all ages, and with a new CEO at the helm for Forevermark, I will be able to spend more time ensuring we build even stronger consumer connections with these miracles of nature across all our activities.”

Liu said in the same statement that Forevermark has “come a very long way in a very short space of time, yet we believe the future will be even more exciting. The brand has taken a number of bold steps in recent years…. As we continue to develop consumer concepts, campaigns, products, and designs, Forevermark will play a vital role in the diamond ecosystem for diamantaires, designers, jewelers, and consumers.”

Last year, Lussier was honored with the American Gem Society’s Lifetime Achievement Award at its annual Circle of Distinction dinner.