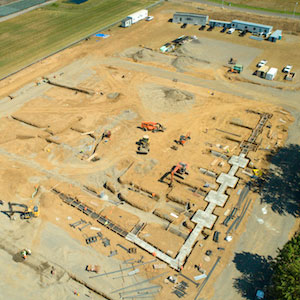 The most-talked-about offering—the pendant with the 1 ct. white center stone for $900 (with mounting)—was, at press time, sold out. And while chief marketing officer Sally Morrison says early demand has been healthy, she admits it’s possible that a lot of the initial orders, particularly in the first two days, may have come from curious jewelry folk.

In the end, Lightbox will live or die based on consumer demand. For now the brand is being sold online only, which is also the only place it’s being advertised. This week, it started running spots on podcasts, perhaps the only jewelry brand to do so. Its choice of venues—it will soon be touted on Oprah’s new podcast—shows that it’s not as millennial focused as some at first assumed. You can hear a Lightbox ad on the Grape Therapy podcast at the 7:00 mark here.

One company involved in lab-growns was among those that placed an early order. While the company sought the 1 ct. center stone, it was only able to pick up a pair of ½ ct. t.w. white studs with a 10k gold mounting. (Total cost with shipping: $615.) The people there—who wish to remain anonymous—were impressed with some things, less so with others.

“When you open [the Fed Ex package], you see the pair of earrings in the box the same way you see the iPhone,” says a person there. “So the box was kind of a wow.”

The earrings sat on top of marketing materials detailing the growing process, which are wrapped around the shipping invoice. But this person was disappointed there was no “inner box” to support the earring box, like an iPhone has. (See the photo below.)

“The box was just sitting there exposed in the Fed Ex carton. If something happens to that Fed Ex box, those earrings could potentially get damaged.

“I do genuinely like the box that holds the earrings, and I like the window that allows the light to come in. I like the play on it. But the whole [packaging] was not a wow.”

As for the jewelry itself, the stones seemed “clean,” and the pieces looked “fine,” a company employee reports.

In any case, Lightbox is still starting out, and everyone involved says the project is a long-term play. With that in mind, this week I visited the construction site that will soon house the Lightbox factory in Gresham, Ore., near Portland.

The factory is set to be completed by the end of next year, and so far construction is on schedule. The initial factory will be 60,000 square feet, though it may expand from there. “Essentially, we can copy and paste as we need additional capacity,” says Adam O’Grady, head of special projects for Element Six, the synthetic-producing subsidiary of De Beers. In 2020, it hopes to produce 500,000 cts. a year.

Element Six chose the Portland area because it offers access to cheap hydroelectric power: Similar to a data center, the Lightbox factory will always need its power on. (Conveniently, it’s located next door to a power station.) It also gives Lightbox access to a tech-savvy labor pool.

“You’re in a city of three and a half million people that has a strong tech-semiconductor business, which is really the people we tend to look for,” says O’Grady.

In its first phase, the factory—which includes two wings that look a bit like facets, in tribute to the product it’s producing—will employ 60 people. If the factory expands, it will employ about 120.

Being near Portland will also let Lightbox tout its stones as “made in the USA.” (Currently, the site says they are grown in Ascot, England, home of Element Six.) That’s not likely to be a big selling point, Morrison says: “We’ll talk about [it]. Do I think it’s the most appealing thing? I think what’s appealing, ultimately, to consumers is they are getting beautiful quality at a very attractive price.”

While diamond growing has traditionally been considered unpredictable, the Element Six machines can spit out diamonds with relative consistency, O’Grady says: “Sometimes you have variation within a batch. You don’t have 99.99 percent exactly the same. There is always some variability, but the variability is a single-digit percent.”

Lightbox will sell blue, pink, and white diamonds, though the same machines will produce them all. “It’s all down to recipe and set up,” says O’Grady.

So how does one grow a diamond? The caratage depends on how long they grow for. With color, “the slower you grow, the better the color will be,” says O’Grady. And clarity isn’t an issue: “Whether its industrial or gem, we don’t tend to have many problems with clarity. It just tends to come without any special intervention. It tends to be consistently VS without having to do much process control.”

There are other differences from traditional diamond production. Diamond mines are known for their high security. Lightbox, not so much.

“We will just treat this like any other Element Six facility,” says O’Grady. “But nothing beyond that. From a product perspective, we don’t expect to have very much product on hand.”

While the jury is still out on Lightbox, visiting the site demonstrated the scale of the project’s ambition—and how the industry is changing.

I’ve been to a few diamond mines. Diamond factories are still a relatively new concept, albeit one we will all have to get used to.

Top: An aerial shot of the Lightbox construction site taken by a drone (photo courtesy of Element Six)