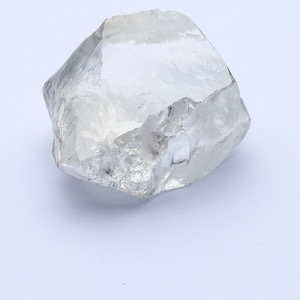 Less than two weeks after its success using advanced technology to mine large diamonds became fodder for an extensive feature in The New Yorker, Lucara Diamond Corp. has managed to find another jaw-dropping diamond.

The latest discovery, a 549 carater (pictured) described as having “exceptional purity,” was discovered at the company’s Karowe mine in Botswana.

Karowe is the same mine that in the last few years produced such record-setting diamonds as the 1,758 ct. Sewelo, the 1,109 ct. Lesedi La Rona, and the 813 ct. Constellation diamond.

The 549 ct. stone is the fourth-largest diamond ever found at Karowe, which has been an active producer since 2012.

“The stone is marvelous and is the masterpiece of its kind,” Lucara’s Botswana sales manager told The New Yorker. “[It has a] smooth surface and the purity is fantastic.”

Already this year, Karowe has produced six diamonds of more than 100 carats, including a 176 ct. stone.

Lucara said in a statement that it had not decided on how to sell either of its new big finds.

In January, Lucara announced that it had sold the 1,758 ct. Sewelo to Louis Vuitton for an undisclosed sum.

In a statement, the Vancouver, British Columbia–based company’s chief executive officer Eira Thomas noted that this gem is the first to be recovered through Lucara’s new mega-diamond recovery (MDR) unit, which allows for diamond recovery after the primary crushing but prior to milling.

Wrote The New Yorker: “Until now, the MDR had not recovered a single large, valuable diamond, because most of the gems were freed later, in the mill. This single discovery will repay Lucara’s investment in the MDR.”

Said Thomas in the statement: “Lucara is extremely pleased to be starting off 2020 with the recovery of two, large, high-quality diamonds that builds on the positive momentum generated following the completion of a strong fourth quarter sale in December and the announcement of our groundbreaking partnership with Louis Vuitton on the Sewelo in January.”