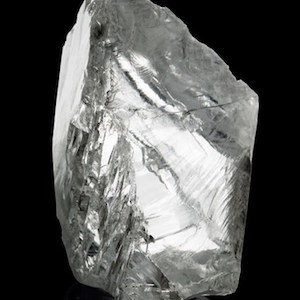 This week, The New Yorker ran a fascinating article about how Canadian miner Lucara has used new technology to unearth a string of freakishly large diamonds from its Karowe mine in Botswana. Among them was the 812.77 ct. Constellation (pictured), discovered in November 2015.

In 2016, the Constellation was purchased by Swiss jeweler de Grisogono and Dubai, United Arab Emirates, diamond company Nemesis International for $63 million—the largest price ever paid for an uncut stone.

What makes this interesting is that, also this week, de Grisogono filed for bankruptcy in Switzerland. The move followed reports that linked the red carpet favorite to Isabel dos Santos, the daughter of Angola’s former president, and her husband, Sindika Dokolo. De Grisogono declined comment on the reports; dos Santos dubbed the allegations “misleading and untrue.”

At press time, it was not clear whether de Grisogono still has an ownership stake in the Constellation—and if it does, what will happen to it, post-bankruptcy. The fine jeweler did not return a request for comment from JCK.

After the purchase, Nemesis cut the Constellation into eight different stones, including the 313 ct. Constellation 1. GIA subsequently rated the emerald cut the largest D-color diamond on record. Last year, a Nemesis International spokesperson told JCK the Constellation 1 is “priceless,” and it had “no commercial plans” for the stone.

But while Nemesis may own the Constellation and its offshoots, it’s not clear who owns Nemesis. In December, an Angolan court linked Nemesis to dos Santos and Dokolo. Last week, the International Consortium of Investigative Journalists also tied Nemesis to Dokolo. Nemesis did not respond to a request for comment.

Nemesis was founded in 2015. Under chief executive officer Konema Mwenenge—who, in 2010, told Global Witness that he had a “professional relationship” with Dokolo—it’s made a name for itself in its home base of Dubai.

In October 2017, it opened the city’s first high-tech diamond-cutting factory, Almas Diamond Services, in partnership with Sodiam, the Angolan state diamond company. At the time, Sodiam also held a stake in de Grisogono. (Two months later, Sodiam said it was divesting its holding.)

In 2016, de Grisogono said its “partnership with Nemesis International [allows] the company to market their best stones.” That same year, Nemesis sold the Swiss company a 404 ct. diamond discovered at the Lulo mine in Angola.

That diamond, the largest ever found in Angola, was cut into a 163 ct. D flawless and christened the “Art of de Grisogono, Creation 1.” It sold for $34 million at a Christie’s Geneva auction in 2017.

The Constellation 1, if it ever comes up for sale, might double that price. Christie’s jewelry specialist François Curiel told The New Yorker it could fetch as much as $70 million. That’s a nice chunk of change—whoever gets it.