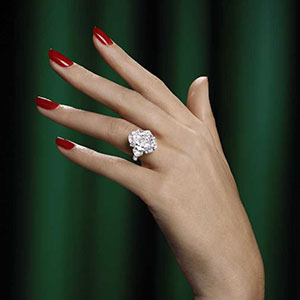 Graff Diamonds says it has sliced and diced the 1,109 ct. Lesedi La Rona into 67 stones—which range in size from below 1 ct. to over 100 cts.

That will eventually include one large “exceptional” stone, which is still being cut and polished. Graff has not released any details on that stone’s possible size and shape.

For now, Graff is offering around 30 diamonds derived from the original piece of mega rough at its stores and on its website. Among those currently available: an 11.12 ct. D flawless oval cut (pictured at top) and a 6.06 ct. D flawless cushion cut (shown below). The prices for those items are not being released but is available upon request.

The other 65 stones will all be D color and of “exceptional” clarity, according to the company.

Graff Diamonds bought the Lesedi—which the Gemological Institute of America considers the second-largest piece of gem rough ever found—last year for $53 million. It took a team of experts one year to analyze how to cut and polish the stone and its many components.

The gem was first discovered by Lucara Diamond at its Karowe mine in Botswana in 2015. When sorter Tiroyaone Mathaba came across it, “at first, I wanted to scream,” he told The Telegraph. “Then I said in a low hoarse voice, ‘God, it’s a diamond! It’s a diamond, it’s a big diamond!’”

The name, which means “our light” in the Tswana language, was chosen by a nationwide contest in Botswana. In 2016, Lucara tried to sell the diamond at a Sotheby’s auction, an unusual move for a piece of rough. However, it failed to meet its $70 million reserve.