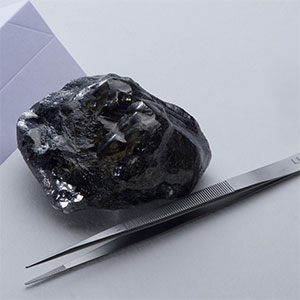 Lucara Diamond has unearthed a whopping 1,758 ct. diamond at its Karowe mine in Botswana, which is now considered the second largest piece of rough ever found.

The stone, described as bigger than a tennis ball, dwarfs even the Lesedi La Rona, the 1,109 ct. stunner Lucara found in 2015, which, until last week, held the title as the second-largest piece of rough ever discovered.

The only bigger recorded find is the 3,106 ct. Cullinan, which was discovered in South Africa in 1905.

However, unlike the Lesedi and Cullinan—both of which boasted top color and clarity—this new find was characterized as a “near gem of variable quality,” though it has “domains of high-quality white gem.” The stone is undergoing “further detailed analysis,” a statement said.

If finds of bigger diamonds seem a little more frequent lately, it’s because technology has made it easier to locate them. While in the past, the mining company business model generally called for them to crush their production and then sort through the remains, since 2015, Lucara has used X-ray technology to improve recovery. As a result, 12 diamonds in excess of 300 carats have been recovered at Karowe, including the two record-breaking stones of more than 1,000 carats.

The new stone weighs close to 352 grams and measures 83 mm x 62 mm x 46 mm. The company has not estimated its possible value or said how it expected the stone to be sold. The company attempted to sell the Lesedi at Sotheby’s, a rare auction appearance for an uncut stone. But that failed.

In 2017, Graff Diamonds paid $50 million for the uncut Lesedi, which means “our light” in Tswana, the native language of Botswana, and was named after a nationwide contest. Earlier this month, it unveiled the 302.37 ct. Graff Lesedi La Rona, the largest piece of polished produced from the original stone, which also produced 66 others.