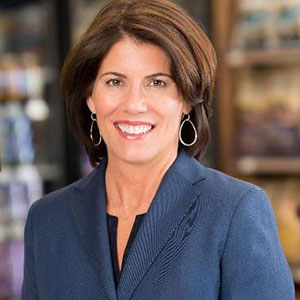 Hudson’s Bay chief executive officer Helena Foulkes (pictured) is stepping down after two years heading the company and will be replaced by Richard Baker, its current executive chairman and majority shareholder.

The move comes after Hudson’s Bay—which owns Saks Fifth Avenue, outlet chain Saks Off Fifth, as well as the fabled Canadian department store that gives the company its name—was taken private in a $2 billion deal led by Baker and a consortium of investors. The deal, which paid shareholders $8.48 a share, means that Hudson’s Bay will no longer be listed on the Toronto Stock Exchange.

Foulkes, who formerly headed CVS Pharmacy, a division of the drugstore chain, joined Hudson’s Bay in February 2018. She replaced Baker, who was then serving as interim CEO, following the sudden departure of Gerald Storch, who headed the company for three years. She will step down on March 13.

Under her tenure, the company sold two of its most well-known assets: department store Lord & Taylor, which was sold to online e-tailer Le Tote last year; and flash-sale e-tailer Gilt Groupe, which merged with rival Rue La La in 2018. It also said that it would close up to 20 Saks Off Fifth stores, its outlet chain.

“The company and I are grateful for Helena’s leadership and significant accomplishments over the last two years,” Baker said in a statement. “Together, we have simplified our company, strengthened retail operations, and reinvigorated our focus on the customer.”

Added Foulkes in the same statement: “We have made bold moves to streamline the business, modernize our marketing, seize digital opportunities, bolster our senior leadership team, and empower each of our retail businesses to excel in the future…. “I’m proud of the work we have done and how HBC embraced cultural change to prioritize delivering for our customers and creating exceptional experiences.”