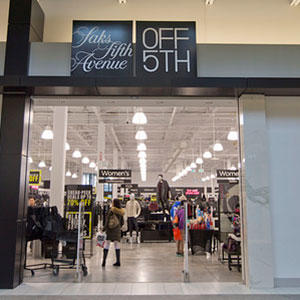 Hudson’s Bay Co. (HBC) said it is doing a “fleet review” of its Saks Off 5th chain in the United States and may close as many as 20 of its 133 stores.

“Further streamlining our retail portfolio enables even greater focus on our businesses with the strongest growth opportunities,” said HBC CEO Helena Foulkes in a statement. “The divestiture of Gilt, rightsizing of Lord & Taylor, the recent merger of our European retail operations in Germany, and today’s announcement exemplify the bold strategic actions we are taking to set HBC up for long-term success.”

Foulkes also announced that HBC was closing its 40 Home Outfitters stores in Canada.

“We know this news is difficult for our associates,” she added in the statement. “We will work to find opportunities within HBC for impacted team members where possible.”

Saks Off 5th was first formed in 1992 and originally called Clearinghouse. In recent years, it’s seen strong expansion. In 2015, it had only 70 stores, which means that its number has nearly doubled over the past five years. Even if it does close 20 stores, there will be still be significantly more Saks Off 5th stores than actual Saks Fifth Avenue stores (42).

Yet, even as outlet business has generally continued to be strong, Saks Off 5th has struggled. HBC’s latest financial results show that Off 5th’s comps declined 2.3 percent in the latest quarter.

In September, Foulkes told Reuters that “we’ve made some poor decisions over the last few years that have hurt [Saks Off 5th’s] profitability. But this is a business that fundamentally can be successful. She told Bloomberg the same month that “the two years we spent integrating Gilt really took our eye off the ball.”