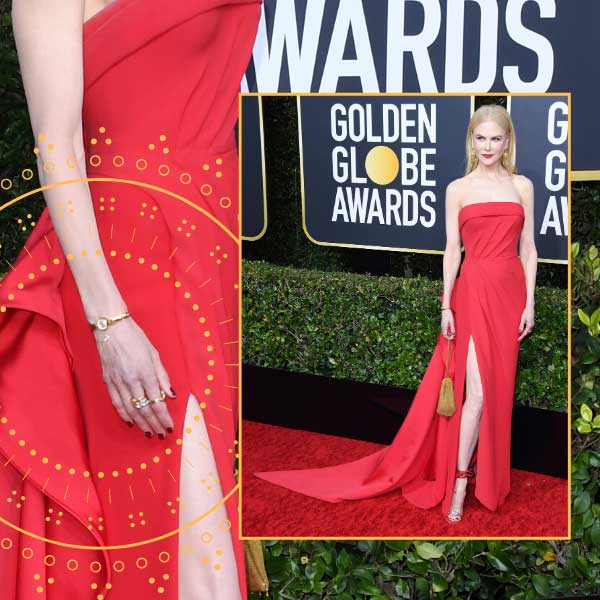 No doubt the biggest takeaway from Sunday night’s Golden Globe Awards show was that statement necklaces ruled the red carpet.

But I personally was also drawn to a quieter jewelry moment—the impeccable Nicole Kidman clad in bright red Atelier Versace and a smattering of gold accessories including Hanut Singh dangle earrings (always a good choice, IMO).

And the subtle flicker of a slim, elegant vintage gold watch by Omega.

Kidman’s an Omega ambassador, so there’s our context for her choice, but even when you’re connected officially with a brand, busting the gear out on the red carpet is a big deal, especially for the ladies (which is why watches are rarely seen—a statement cuff or bracelet stack are the go-tos).

This is not the first time the actress, who was a Golden Globe nominee for her role in Big Little Lies, has made time (get it?) for a major red carpet awards show. But in the past she has favored vintage diamond Omegas (see Emmys 2017 and Oscars 2018), often layering them with a diamond bracelet.

Kidman is, of course, not the only leading lady to fulfill her face-of-the-brand role by slipping on a watch at a major red carpet fashion event. Diane Kruger has worn a Jaeger-LeCoultre Joaillerie 101 Art Deco watch at both the Oscars and Golden Globes.

Bulgari always dominates on the red carpet. And as a presenter at the 2019 Golden Globes, Lupita Nyong’o wore the brand’s High Jewelry Serpenti hidden watch in white gold, diamonds, and emeralds.

And at last year’s Met Gala, Serena Williams, who has a jewelry line of her own, wore an Audemars Piguet Royal Oak watch set with 860 diamonds.

Kidman may well be nominated for a best supporting actress Oscar for her role as Gretchen Carlson in Bombshell—we’ll find out Jan. 13. Maybe she and her stylist Julia von Boehm will whip out an Omega for that.

I’ll be watching for it (ha ha) and also eyeing the wrists of the season’s other red carpet bombshells.