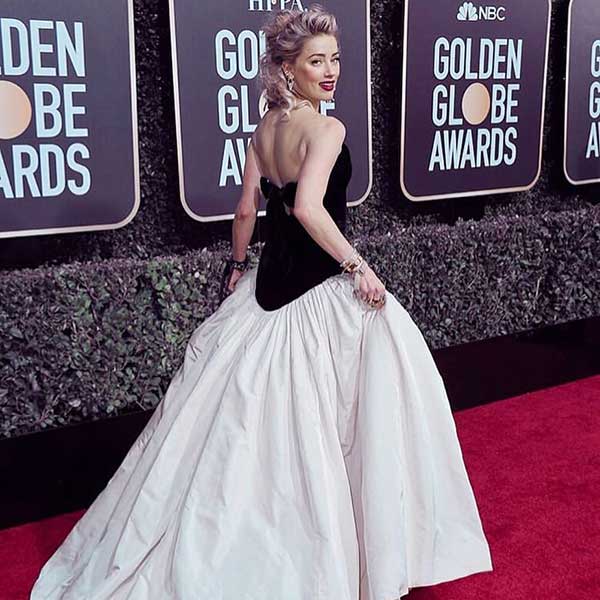 My first thought when she bounced onto the red carpet, her hair a gloriously upswept tangle of high-volume, ringleted blond curls: Wait, who is that?

Then E! let me know it was actress Amber Heard, star of Aquaman, who has also appeared in a number of other not-so-commercial films and TV shows (I first saw her about 10 years ago, in a 2009 indie flick called The Joneses, which my friend coproduced; Heard’s beauty was memorable then, and now she’s at the pinnacle of bombshell).

When I saw her jewelry—both ears jam-packed with a trail of gold and diamond studs that culminated in mismatched gold danglers, multiple rings on many, many fingers, and a pile of gold bracelets extending to her forearm that was right up my alley—I was struck by the sheer quantity.

Heard’s full look, as captured by the Daily Mail (video via: YouTube)

I also wondered if she was wearing jewelry from her own collection—it all had that fine-but-wearable quality. But mostly I just thought, Wow, here’s a JEWELRY PERSON. Someone who, like so many of us, absolutely loves it.

Which makes it difficult to show restraint.

I turned to Lauren Kulchinsky Levison, owner of Mayfair Rocks in East Hampton, N.Y., and someone whose taste in fashion and styling I trust implicitly, for a gut check on Heard’s “more is more” moment. Her take:

“What I loved is the individuality of her look,” says Levison. “For me, ‘more’ jewelry makes for a more casual look and ‘less’ is more finished. I think she was going for ‘I may have a stylist, but I am not going to look like I have one. I want to look like each piece is a talisman that means something to me.”

As it happens, Karla Welch is Heard’s stylist (and the genius behind some of our favorite Golden Globes looks from last night). But I have a feeling that Heard had a hand (no pun!) in selecting the jewels.

I think this is her thing.

My reasoning: When Danielle Pergament interviewed Heard for Allure magazine in 2017, the writer observed: “She wears lots of earrings—five in one ear, three in the other—and rings and bracelets and nothing matches and it’s all this cool, eclectic, la vie bohème jumble.”

As for last night, Levison describes Heard’s jewelry style as a “modern version of punk.” “It’s softer, not hard,” she says, “but it isn’t for everyone. And if you’re looking to achieve this style, remember it isn’t ‘throw your whole jewelry box on.’ The choices were made with intention, and that is what makes the look superb and very much of this generation.”

Punk or bohemian, too much or just right, I think JCK’s Emili Vesilind nailed it in yesterday’s Golden Globes jewelry recap: “A glorious maximalism has come into vogue, and stylists are suddenly unafraid to over-gild their lilies.”