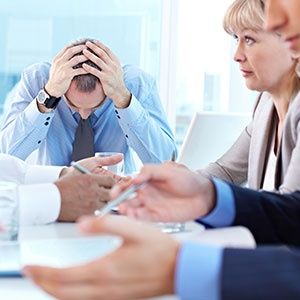 During the last diamond industry crisis—four years ago—many lamented that a “perfect storm” of factors had converged to knock the industry on its back.

Perfect storms are, by definition, rare. At least, they should be.

And yet, the natural diamond industry is once again being drenched by a ceaseless downpour of negative news. There’s the sagging world economy. The perpetual problem of bank financing. Continued issues with midstream profitability. And competition from lab-grown diamonds.

All of which has led to an insecure market and pipeline that looks dangerously overstuffed. De Beers’ sales are now at their lowest level since 2015, the year of the last crisis.

Analyst Paul Zimnisky believes the current funk was in part sparked by the Modi-Choksi bank scandals in early 2018. Lenders, who were already viewing the industry skeptically, cracked down even harder.

“The creditors changed their lending requirements to reflect increased risk in the market,” Zimnisky says. “Since then, financing has been decreasing on a steady basis. You have, in some cases, forced liquidation of inventory that the market cannot afford to hold.”

He believes that billions in gems were dumped onto the market at low prices. At the same time, demand was weak in key markets such as India and China, putting further pressure on polished prices.

Diamond miners have been traditionally reluctant to lower rough prices, because they don’t want to diminish value for their product. And naturally, they prefer large allocations.

Diamond manufacturers, meanwhile, have been traditionally reluctant to turn down those allocations, even when they’re too large or too expensive. They want to keep their factories humming and stay on the producers’ good side.

But now, the manufacturers have reached the breaking point, and they’ve decided they can’t keep losing money. There’s no sense buying when they are already clogged with inventory.

There was a lot of hand-wringing over ABN Amro’s letter restricting financing to buy rough. Still, it was built around logical, even basic, advice for any business: Don’t lose money! Or, at least: Don’t lose ours.

Erik Jens, who formerly ran the ABN diamond desk and is now developing the LuxuryFintech platform, thinks that the diamond business is still stuck in the old supply-side mentality, which dictates rough prices should never go down. He notes that other industries, like oil, deal with fluctuating prices all the time.

“We should really understand the needs of the consumer, how much people are willing to buy diamonds for,” he says. “We need to reset the pricing mechanism. If that means that prices come down, so then margins come back, so be it. That is how you create a healthy market. The market needs to find a balance. Right now, we don’t have a balance.”

The key to getting out of this crisis, all agree, is not just restricting supply but boosting demand. But that may not be so easy.

The world economy is looking shaky, and while America has hummed along for most of the year, many economists now forecast a recession. The trade war with China is another question mark. No one knows how it will play out, but, until it ends, Americans won’t likely be spared pain. Wars hurt people. That’s the point.

Granted, the industry can’t control the macro environment. But it’s also done a poor job of promoting itself.

On a recent conference call, Pandora chief executive officer Alexander Lacik said that all turnarounds start “with understanding where we went wrong with the consumer.”

And while plenty of people still buy diamonds—just like plenty still buy Pandora—veteran dealers such as Nicky Mehta worry that new consumers just don’t have the same taste for diamonds older generations do.

“Generation Y and Z have a different mindset,” says the president of New York City–based Diamond Days. “They all dress down. When I talk to my daughter and her friends, they are not interested in diamonds. They don’t want to spend $2,000 on diamonds when they have huge college debt.”

And then there are lab-growns. For years, diamonds had almost no competition. When a couple got engaged, they’d visit the local jeweler, who would sell them a diamond engagement ring. If they wanted something off the beaten path, maybe they’d get an ideal cut.

Now, not only can consumers buy almost anything, but lab-growns have become a serious competitor. Every man-made engagement ring purchased likely means one less sale of a natural. Ironically, it’s the fashion business—the corner that De Beers wants to stuff lab-growns into—where the mined sector largely has the field to itself.

For all the hype they’ve sparked, lab-grown diamonds still constitute a small percentage of the market. But the diamond market typically grows by a single-digit percent a year. It doesn’t have market share to spare.

Moreover, it’s possible—even likely—that quite a few stones that are being sold as natural are actually synthetic. Which contributes to the perception of a glut.

There are signs the natural business is waking up. De Beers has said it will amp up its marketing spend this holiday. The Diamond Producers Association is well financed and active.

But this it isn’t the ’90s anymore. The classic De Beers ads spanned generations. They aired at a time when there was true mass media. No modern campaign is likely to have its reach.

While the diamond midstream looks to producers to bail them out, lab-grown diamond dealers are promoting themselves. They all have PR firms and shell out what seems like a small fortune on Google and Facebook ads. All this, while likely losing money.

Yet, at the same time, established, profitable, billion-dollar natural diamond companies often have small or even nonexistent marketing budgets. Granted, owners look at their family’s money very differently than a start-up looks at a hedge fund’s. But a company can’t expect huge demand for its product if it was only ever advertised by De Beers 10 years ago.

If history is a guide, the industry will soon emerge from this funk. The big producers have been offering more breathing room and flexibility to clients. That is usually a precursor to confidence returning to the market.

And yet, if modern history is a guide, the trade will eventually end up back in this hole. This is the industry’s third crisis in the last 11 years. Perhaps we can excuse 2008, when the world melted down. But, two crises in five years is not healthy.

The problem isn’t just a “perfect storm.” It’s the clouds that have been gathering for some time. Unless the industry starts to deal with its very real issues, and adopts new ways of thinking, it will likely experience many more seasons of rain.