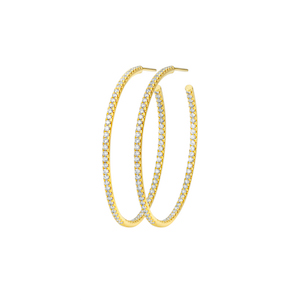 The Diamond Production Association (DPA) has debuted “For Me, From Me,” a new campaign meant to encourage women to purchase diamonds for themselves.

The $10 million–$15 million campaign will include digital, print, television, and out-of-home components. It will have its heaviest weight from May through September, which, as a DPA spokesperson acknowledges, is not generally the traditional time for diamond advertising.

“We think there is an enormous opportunity in the seasons when the retail sector isn’t traditionally focused on advertising spend,” the spokesperson says. “We also know from research that women like buying jewelry on vacations and in moments of relaxation. We think the summer months are a good time to be speaking to women about this.”

The first campaign video will premiere on Feb. 24, during the E! News coverage of the Academy Awards, and can be seen below. Other videos can be seen here.

While the ads feature items by Sara Weinstock, Hearts On Fire, Lauren Addison, and Sethi Couture, the DPA is not putting together a specific collection. It wants retailers to start their own. Though the price points involved are “pretty broad,” the DPA adds that the standard self-purchase price point is between $500 and $2,000, with a median of $1,300.

The campaign targets women between 35 and 55 years old, though the DPA notes that it hopes to attract a wide group, as one-third of all self-purchases are done by millennials.

The DPA is offering retailers free licenses and use of campaign images,  videos, and social media content (though it’s not offering co-op dollars). Retailers can sign up here.

The DPA also plans to offer training by Performance Concepts at trade shows (including at the upcoming American Gem Society Conclave), via free webinars, and at certain stores.

A DPA statement says that female self-purchase is the fastest-growing segment of the natural diamond market, accounting for $43 billion in 2017, or one-third of all diamond jewelry sales, according to stats from De Beers.

“It’s timely for the diamond industry to acknowledge the different needs and mindset of the female self-purchaser and position itself to optimally service her,” said Kristina Buckley Kayel, managing director of DPA North America, in a statement. “Our latest campaign celebrates the distinct pride and joy women feel in purchasing a diamond for themselves, a celebration of self that is beautifully embodied by the enduring qualities of a natural diamond.”