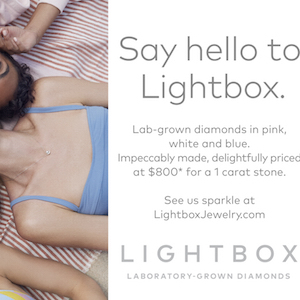 When Swarovski announced it was entering the lab-grown diamond business in 2016, some in the natural industry seemed surprisingly happy about it. Swarovksi was just the kind of established fashion-oriented company that the trade wanted in that space.

For one, Swarovski knows how to sell “things that sparkle,” as Swarovski board member Daniel Cohen told me. “Consumers,” he noted, “make choices based on product design and price point.” The stones in those products could be crystals, lab-grown, flux-grown, or moissanite. It doesn’t matter. If the look and price is right, you don’t have to engage in endless arguments about whether the diamonds are “real” or “eco-friendly” or all the rest. The pieces just sell. That’s pretty much Mass-Market Jewelry 101. Yet, it sometimes seems like many of the companies in the lab-grown space are so enamored with being disruptive, that they fall down their own rabbit hole.

One of the companies that reportedly was talking to Swarovski about supplying diamonds to this initiative was De Beers. That didn’t happen. But in many ways, De Beers’ plan for its Lightbox Jewelry line is similar to the what the industry considered the ideal Swarovski template. With Lightbox, De Beers is selling man-made diamonds the way the natural industry wants them to be sold.

One would think that the lab-grown producers would see De Beers’ decision to enter the industry as a great victory, but they seem pretty wary. For one, with this announcement, De Beers is “disrupting the disrupters,” as industry analyst Edahn Golan put it, and undercutting them significantly on price. Each diamond will sell for $800 per ct., and then De Beers will add on $100 for a silver mounting or $200 for a gold mounting. So even its top-end product—a 1 ct. diamond in a gold necklace—will sell for only $1,000. That’s a lot less than most lab-grown product is selling for. It’s just a shade more expensive than the prices charged for top-end moissanite.

This will likely cause competing growers to lower their prices, which would inadvertently prove the natural industry’s central thesis: Lab stones don’t hold their value. And yet, De Beers executives stressed to me yesterday that they consider this a potentially profitable business, not a retaliatory or defensive exercise. And the fact is, the lab-grown market is very much wide open. For all the promise of man-made gems, the business is full of small companies with small ad budgets, and it’s hard to truly build a brand or product that way. There are only a few companies with the potential marketing muscle to truly promote a real lab-grown jewelry line, and De Beers is one of them. 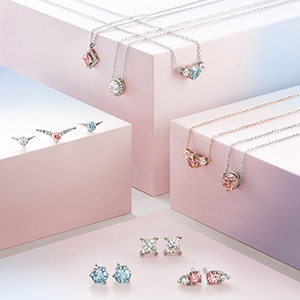 What De Beers is doing is in many ways the path recommended by Clayton Christensen, the guru of disruptive innovation. Christensen, a Harvard Business School professor, is known for his theory about how big companies are felled by cheaper alternatives.

At first, the theory says, the big companies scoff at these new entrants, arguing they are lower quality. And yet, these big companies are in a bind: They can’t embrace these new products even if they wanted to, as that would hurt their core business. It’s only when these lower-cost items have gobbled up a significant part of their market share that they launch their own competing products, and by then it’s too late.

But there is hope, writes Larissa MacFarquhar in The New Yorker:

After studying a few exceptions to the pattern of disruption, Christensen concluded that the only way a big company could avoid being disrupted was to set up a small spinoff company, somewhere far away from headquarters, that would function as a start-up, make the new low-end product, and be independent enough to ignore what counted as sensible for the mother ship.

Which is pretty much what De Beers is doing.

This new initiative could also be seen as De Beers embracing the doctrine of self-cannibalization. Says Harvard Business Review: “Forward-looking incumbents recognize the need to cannibalize their own products, rather than leaving it to other startups, who are more than happy to take on the challenge.”

Perhaps the most famous example of this is Apple killing iPod sales when it included a music app in the iPhone. As Apple CEO Steve Jobs put it, “If you don’t cannibalize yourself, someone else will.” Self-cannibalization has since become a tenet of the new economy; Signet arguably did it when it bought James Allen, though established retailers buying dot-coms has become so common no one bats an eye about it anymore.

All this said, executives told me yesterday that they view Lightbox as “additive” and potentially attracting a new consumer to the industry. It is also a deliberately limited form of self-cannibalization. Lightbox is being pitched for the fashion arena, not for bridal. Execs say this is dictated by its consumer research. But it would be truly shocking—more shocking, even, than yesterday’s announcement—if De Beers ever sold lab-grown bridal. Engagement rings are the heart of the diamond business. So even though De Beers doesn’t like it when lab-grown companies target the engagement market, this may force them to do so more than ever.

That’s not the only risk. Lightbox could potentially hurt the market for low-end Indian goods, which are mostly used in fashion price-point items. A lot of cheaper material is, plainly put, of poor quality. Why would anyone use it for fashion jewelry, when De Beers is now producing an arguably better alternative?

Finally, Lightbox also gives the lab-grown category a lot more industry cred. Lab-grown companies always complain that consumers have embraced the product faster than the industry. Yet from where I sit, the product has won a tremendous amount of trade acceptance in a short time. Signet isn’t on board yet—and high-end companies like Tiffany and Cartier may never be. But Stuller and Helzberg and even Rolls-Royce have climbed on the bandwagon. De Beers’ announcement may give lab-grown diamonds the final push toward complete industry acceptance. But that’s just bowing to the inevitable. It was headed that way anyway.

De Beers’ decision to start a lab-grown line is, all in all, a fascinating, bold, though clearly risky development. The leading diamond associations all weighed in with surprisingly positive spins, hoping De Beers will help lead this new sector into the mainstream industry. The thinking seems to be, “If you can’t kill it, join it.”

Yesterday, Lightbox told me it would be open to joining the International Grown Diamond Association (IDGA). That probably won’t happen. De Beers doesn’t like the IGDA’s pitch, and vice versa. But it might be a good thing to have a natural diamond company in a lab-grown association, just as it’s now good to have a diamond grower in the Diamond Producers Association.

Right now, the battle between lab-grown and natural companies has gotten surprisingly nasty. Yet, both categories are here to stay; neither seems poised to disrupt the other out of business. The two types of diamonds need to figure out how to work together better. Unfortunately, some hostility is probably inevitable. But it doesn’t have to be this bad. And now it may fall to De Beers, the company that invented the modern diamond industry, to help bridge the gap.