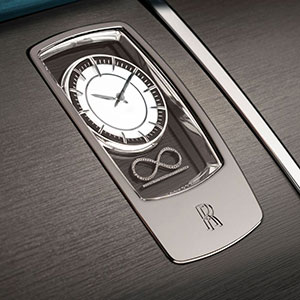 Cars in the limited-edition Rolls-Royce Adamas collection feature 88 black diamonds on their dashboards. But there’s a twist that may surprise people in the industry: They are lab-created diamonds.

The stones, which are also treated, form the infinity symbol and sit underneath a clock mounted on the car’s dashboard (pictured right). According to the Rolls-Royce press release, the symbol “provides a jewelry-like reminder of the restless spirits of the inhabitants of these motor cars.” Autoweek  describes it as something “a Bond villain might have.”

Gerry Spahn, head of communications for Rolls-Royce Motor Cars North America, tells JCK that the fabled carmaker has been looking at synthetic gems for some time, noting that it frequently adorns its cars with gold and other jewelry materials. For instance, last year, it sprayed a car with diamond dust.

However, for this particular automobile, Rolls-Royce opted for lab-growns, as the car was meant as a “showcase of carbon technology.” 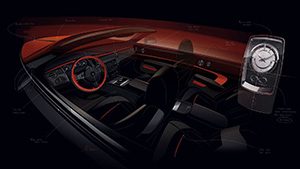 San Francisco–based Ada Diamonds supplied the diamonds, and founder and CEO Jason Payne admits that wasn’t easy. His company needed to come up with at least 88 heat-treated black stones, from 0.7 millimeters to 0.9 millimeters each. Only 70 Adamas cars will be produced, though that still adds up to a whopping 6,000 stones.

Payne believes it would be “tough” to produce that many black naturals, though he admits he’s not an expert on that sector.

So far, he says, the reaction has been good.

“I was shocked at the acceptance of Rolls-Royce owners of this product [lab-grown diamonds],” he says. “A lot of high-net-worth individuals acknowledge that these products are diamonds.”

Payne believes that the Volkswagen Dieselgate scandal has made automakers reckon with their impact on the environment.

“Whether or not the industry buys the green argument [for lab-grown diamonds], automakers are trying to out-green each other today, and that’s one of the reasons they are using our product,” he says.

Meanwhile, Spahn says all 70 cars, which haven’t yet been produced, are already sold out via preorder for $456,000. The line is part of Rolls-Royce’s “darker, edgier” Black Badge sub-brand.

And for those in the industry who are sensitive about such things, Spahn predicts Rolls-Royce will use natural diamonds on its cars again.

“It’s not an either/or,” he says. “This is just the direction we wanted to go.”