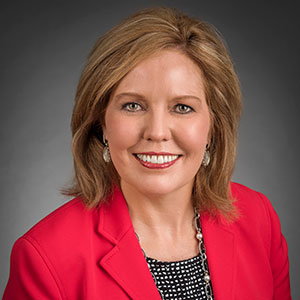 In an interview with Yahoo Finance posted this week, Signet CEO Gina Drosos didn’t say her company would never carry lab-grown diamonds, but she sounded decidedly mixed about the concept.

“We are always looking at trends and things that we think our customers might be interested in,” she said. “What our research indicates, though, is that for that very special purchase of a diamond engagement ring, people really want a real diamond.”

“Several years ago, more than two-thirds of our advertising was on TV,” Drosos said. “This year, it’s less than half. At the same time, we have been more than doubling our spend on digital.

“We can much better target our customers on digital,” she continued. “Less than 2 percent of Americans will get engaged in the next year. So blasting out a big TV ad is not nearly as targeted and as efficient as when we can target people using digital marketing.”

But she added that, in addition to delaying marriage, millennials have “less linear” relationships than past generations. For example, 40 percent of Signet’s bridal shoppers already have children.

In another segment of the interview, Drosos, a former executive with Procter & Gamble, talked about adding more diversity to the upper echelons of Signet, which has struggled with gender issues.

She noted that the company just added two new female directors, so now its board is split equally between men and women.

“I have a track record throughout my career of building diverse teams and highly inclusive culture[s], so it’s very important to me that Signet lead in this area,” she added. “I’m very confident that [Signet] pay[s] women equally for equal jobs with the same experience, and we are really building a culture of diversity, inclusion, respect.”

She noted that 70 percent of Signet’s workforce is women, in addition to 68 percent of its field leadership, more than half of its C-suite, and now half its board.