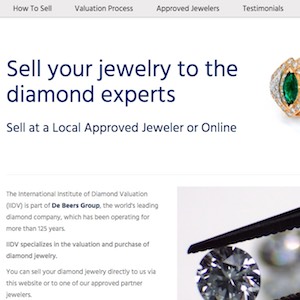 For more than a decade, De Beers has become known for launching daring, often surprising side projects—starting in 2001, when it first debuted its retail chain, to last year’s shocking U-turn into lab-grown line Lightbox.

Usually, these ideas aren’t just meant as stand-alone businesses, but are tied to larger corporate concerns, whether about lab-grown diamonds, artisanal mining, or supply chain traceability.

Five years ago, the recycled diamond market was widely believed to be on the upswing. Aging baby boomers were poised to empty out their jewelry boxes and flood the market with used gems. Martin Rapaport proclaimed the world’s largest diamond mine might be in Florida. Some wondered whether this might hurt traditional diamond producers.

De Beers executives, however, worried about something else: consumers getting ripped off. At a 2014 JCK Las Vegas forum, former CEO Philippe Mellier called the trade-in experience “awful” and warned that if consumers don’t receive decent money for their diamond, it could hurt consumer confidence.

A few months later, De Beers launched the International Institute of Diamond Valuation (IIDV) with two rather startling vows. First, it would pay the “highest possible price…on the secondary, wholesale market” for diamonds. Second, it would buy any natural gem, even “a one pointer in a belt buckle.” Traders joked that it would be a great way to get rid of unsalable inventory.

Earlier this month, the IIDV folded. While its opening generated tons of hype, it was hampered by continual changes in management and direction. It started as a service for retailers, then added a direct-to-consumer site, and finally pivoted to retailer events. Those events generated decent volume and, insiders insist, offered a better experience and fairer prices than most. But not enough jewelers signed on.

Several things hampered the IIDV, say sources. It had tough know-your-customer (KYC) standards. It’s hard to blame De Beers for this, given how cautious it is about reputational risk. But that meant missed opportunities.

Diamond trade-ins also never received the same public attention as gold trade-ins, so the IIDV had a tough time developing a strong consumer business, which would require more advertising dollars than it was willing to spend. Some expressed annoyance that high-value pieces rarely came to the IIDV, instead heading to auction houses. It may have helped to use the De Beers name, which the parent company bought back in 2017. That never happened.

Some company vets think that De Beers may be taking a harder look at its side projects now that the market looks bumpy. At least one believes the IIDV was never destined to make a profit.

From the beginning, De Beers said its mission with the IIDV was not just to participate in the secondhand market, but to learn about it. Perhaps the most significant thing is what it discovered: The trade-in market has moved to C2C (consumer-to-consumer).

C2C sites such as I Do Now I Don’t and Everything But the House seemingly fulfill the original IIDV charter: They offer a secondary market that provides fair value for jewels.

“The consumer-to-consumer market is growing and likely to be the future of this sector,” said spokesperson David Johnson. “We will therefore continue to look for opportunities in this space.”

The IIDV model, patterned after traditional retail trade-ins, “is no longer the optimal means of ensuring that diamond recyclers are treated fairly and to underline the inherent value of diamonds,” Johnson said.

That may be most intriguing lesson from De Beers’ foray into buybacks. It didn’t need to invent a better mechanism. The market developed one.