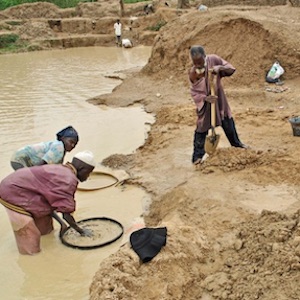 In the early 2000s, as the Kimberley Process was being forged, an NGO activist told me the best answer to post-war Sierra Leone’s diamond woes just might be De Beers reopening a buying office there. He fretted the company would never do that, as it feared the public relations repercussions.

But now, De Beers is returning to Sierra Leone, decades after it shut its buying offices in “the bush.” It’s all part of a new pilot project, called GemFair, that uses digital technology to tackle one of the industry’s most stubborn and enduring challenges—the artisanal mining sector.

According to the Ontario, Canada–based Diamond Development Initiative (DDI), up to 20 percent of the world’s gem diamonds are dug up by artisanal miners, often working for poor pay in even poorer conditions.

“The work is hard, dirty, and dangerous,” says the DDI. “Because gravel must be washed in order to find the gems, much of a digger’s day is spent standing in stagnant water. Health conditions are bad, and mine sites are incubators for disease. Miners often face exploitation, human rights abuses, and live in extreme poverty.”

The industry has long considered the artisanal mining sector a major reputational risk; most notoriously, the diamond fields of Sierra Leone became the breeding ground for blood diamonds.

From a public relations standpoint, it would be easy for the industry to simply shun artisanal diamonds, like it does conflict diamonds. But activists warn this would create even worse problems: Some 1.5 million people, in the world’s poorest countries, make their living as diamond diggers.

And, in fact, with more brands embracing origin tracking—including De Beers’ Forevermark—some worry that artisanal diamonds will be increasingly shut out from the industry, in favor of gems from large mining companies.

Though the years, there have been numerous—mostly unsuccessful—business ideas for the artisanal sector, notably Martin Rapaport’s idea of Fair Trade diamonds. These plans are mostly premised on the idea that if you offer miners higher prices for ethically produced diamonds, they will not only enjoy greater profits but be motivated to improve working conditions.

GemFair follows this template, but with a high-tech twist. 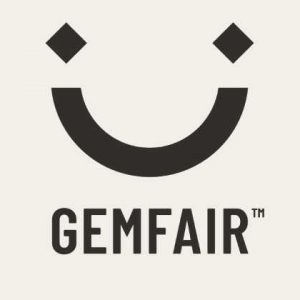 “The sites have to meet a minimum set of requirements: No child labor, no forced labor, no violence,” says Feriel Zerouki, De Beers’ senior vice president, international relations and ethical initiatives. “We also have environment requirements. [DDI] will work with them on continual improvement.”

Sites that meet the criteria will get a dedicated tablet stocked with a GemFair app. The app is a “digital toolkit” that gives miners—some of whom have spent their whole lives digging for diamonds—a crash course in the complex art of pricing the stones.

“One thing we found the miners would really appreciate is a better understanding of their product,” says Zerouki. “They feel that they are exploited by the current ecosystem. They are just not trained or well versed on diamond valuation.”

The idea is not only to raise to the standards in the diamond fields, but also to ensure that gems that meet those standards secure their proper place in the mainstream industry.

“We want to level the playing field and make sure that we include artisanal production in the legitimate supply chain,” says Zerouki. “Right now we see that there is a huge barrier for artisanal mines entering the market. The feedback that we have received from miners is that it is extremely hard for them to get access to the international markets.”

In fact, Zerouki says De Beers may be a possible buyer for the stones, which it could sell through its online auction platform.

“The miners will not be forced to sell to us,” says Zerouki, “but we are going to look at the intake.”

The GemFair production may also be sold separately or possibly branded, but De Beers “doesn’t have enough information right now,” says Zerouki. “We need to look at whether the intake will be salable enough.”

Of course, this project is not without challenges. Tracing diamonds has long proved difficult, but it’s particularly so in the informal and free-flowing artisanal mining sector.

De Beers says it’s done a lot of work to ensure only qualified diamonds become part of the program, by using GPS, bag-and-tag protocols, and possibly its new blockchain platform.

“We are facing many issues, in terms of logistics, in terms of getting the product to market,” Zerouki admits. “We still need to pick through all those challenges…. [In the past] it has been hard to find a commercial incentive to raise industry standards. To work, this needs to be ethically sustainable but also commercially sustainable.”

Still, if De Beers cracks the code in Sierra Leone, GemFair could be expanded not only to other countries but to other minerals.

“If we can help support the formalization to the artisanal mining sector, we can really make a positive difference in the lives of 1.5 million people,” says Zerouki. “That is what drives this, despite the challenges.”