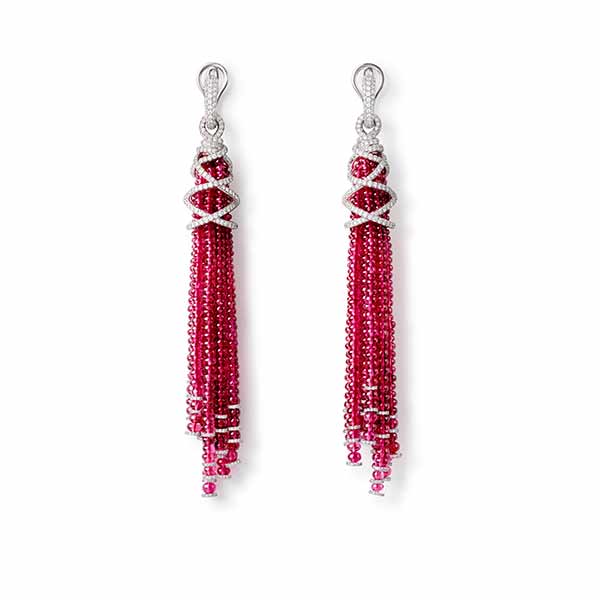 Every year, without fail, the first week of February finds me in Tucson, Ariz., attending the city’s annual confluence of gem shows. The tradition started in 1955 when the Tucson Gem and Mineral Society staged its first buying show. What began as a modest gathering of amateur collectors and hobbyists gradually spawned a succession of satellite ventures that attracted miners, cutters, dealers, gemologists, mineralogists, retailers, and designers from all over the world.

Today, at least a couple dozen shows take place during the first two weeks of February in hotel rooms and lobbies across town, drawing a roguish mix of characters to the run-down motels and Mexican restaurants that populate Tucson’s sprawling neighborhoods.

Downtown, near the historic Hotel Congress, where John Dillinger and his gang holed up in 1934, sits the Tucson Convention Center, home to the most upscale of all the city’s gem shows, the GemFair. Organized by the American Gem Trade Association (AGTA), the restricted-entry show is the financial hub of the gemstone trade, yet unlike the more hoity-toity shows on the jewelry calendar, it’s where guys wearing 10-gallon cowboy hats and dusty jeans look completely in their element.

I love everything about the GemFair, but, for the most part, you’ll find me a few miles west of the convention center, at the JW Marriott Tucson Starr Pass Resort & Spa, a stellar property with commanding views of the saguaro-studded Sonoran Desert. Since 2014, the hotel has played host to JCK Tucson, the finished jewelry counterpoint to Tucson’s abundance of loose gem and mineral destinations. This year’s show is just one of the many things I’m excited about as I make my way to Arizona today. Here’s my cheat sheet for what else to expect from the coming week.

The jewelry industry’s most celebrated designer will speak to JCK Tucson attendees this Thursday, Feb. 1, at 10 a.m. as part of the show’s Fireside Chat series. I’ve interviewed Yurman on numerous occasions, so trust me on this: He gives great quote.

The presentation will focus on how the Yurman brand grew from its humble, artisanal roots into a global sensation and his secrets to staying relevant. Not to be missed!

The next big gem find

If this year is typical, expect to come away from the week with a clearer understanding of which gem(s) we are likely to see in jewelry collections later in the year. That’s because supplies dictate demand in this business. In other words, designers are bound by what the earth is offering.

Last year’s big news was the discovery of emeralds in Ethiopia. What will the wide world of gems reveal at the 2018 shows? I’ll take a stab at one new-ish source: rubies. From Greenland. The company that operates the Aappaluttoq Mine, a producer of rubies and pink sapphires, is staging a press event this week to draw attention to its steady supply. Stay tuned for more details about when the goods are expected to come to market.

Blockchain and the colored-stone business

In Tucson, the need for transparency across supply chains is sure to be a major topic of conversation. Earlier this month, Gübelin Gem Lab announced a “Provenance Proof Blockchain” designed in partnership with London-based technology firm Everledger (the same company that is reportedly creating a tracking system with the e-tailer Brilliant Earth). The scheme is designed to provide “a digital, decentralized ledger that tracks gemstones throughout their lifetime journey along the supply chain, from mine to end-consumer,” according to a press release.

It’s not the first time Gübelin has led an effort to track colored stones. Late last year, the lab partnered with the mining company Gemfields on a “paternity testing” mechanism that would allow uncut gemstones to be tagged at the source with specially encoded nanoparticles. Intended to survive the cutting, polishing, and treatment processes, these markers would serve as a way to identify the stone’s mine of origin.

The campaign is not entirely free of controversy. From what I’m told, there’s some concern that smaller miners and dealers without access to the technology will be disenfranchised over time. Like it or not, however, the blockchain concept, which has been embraced by everyone from Bitcoin to De Beers, is here to stay. Only time will tell if the historically opaque gem trade is ready for its close-up.

All eyes on the padparadscha prize

In a timely bit of news, we just learned that Princess Eugenie, Prince Harry’s cousin and daughter of Prince Andrew and Sarah Ferguson, got engaged to Jack Brooksbank with a padparadscha sapphire ring. Large and high-quality specimens of the orangey-pink sapphire, whose color is often compared to that of a Sri Lankan sunset, are exceedingly rare and poised to become ever rarer as public interest in the gem spikes. Keep your eyes peeled for lookalike materials of less rarefied origin, such as morganite.