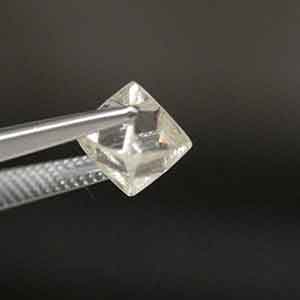 De Beers is piloting what it calls the “first diamond blockchain to span the entire value chain.”

The idea is “to create a tamper-proof, immutable, absolutely trustworthy public ledger that will follow the path of a diamond along its journey,” CEO Bruce Cleaver tells JCK.

What’s unique about this is that De Beers will offer the technology to the industry at large later this year. And while De Beers is leading the project, the plan is to develop an open-source platform in conjunction with other industry players that will eventually be managed by an independent foundation.

We have a larger explanation of blockchain and how it might apply to diamonds here. But basically, blockchain creates a decentralized database backed up by several computers. The idea is that technology recorded in multiple locations is harder to tamper with.

The company is still trying to figure out how it wants to use the technology, but it clearly sees the initiative as a potential game changer: a way to provide greater assurance to consumers that diamonds are natural and conflict-free.

Cleaver (pictured) says that it might also provide comfort to the industry’s banks, allowing them to trace the diamonds they are financing. “They will have greater visibility for the people they are lending to,” he says.

And it might also provide an easier way to track diamonds for security reasons.

“I think it will be good for the supply chain,” he says. “Elements of the supply chain are in need of modernization. The aim is to try and simplify procedures. Parts of the pipeline are very paper-based.”

De Beers’ Forevermark brand already tracks diamonds through the supply chain, and Cleaver says that he isn’t sure if the technology will be used for any of De Beers’ proprietary offerings.

If it is, though, it may change how De Beers has traditionally done business. The company typically hasn’t specified the country or mine that supplies its rough diamonds, simply aggregating them together in tailored assortments. Cleaver isn’t sure if any blockchain initiative will specify a particular De Beers mine.

“We are going to keep an open mind on that,” he says. “We want to create something that is most meaningful for the consumer. So we will be informed by what the consumer thinks.”

De Beers isn’t the only industry entity looking at the concept. Another blockchain company, Everledger, is focused on diamonds and is reportedly working to create a tracking system with e-tailer Brilliant Earth. (De Beers is using another technical provider, it says.) Russian diamond producer Alrosa has also expressed interest in the concept.

You can see more information on De Beers’ initiative here. And this job ad seems to provide more details.